BJP will lose because of its policies, says Mayawati - GulfToday

BJP will lose because of its policies, says Mayawati 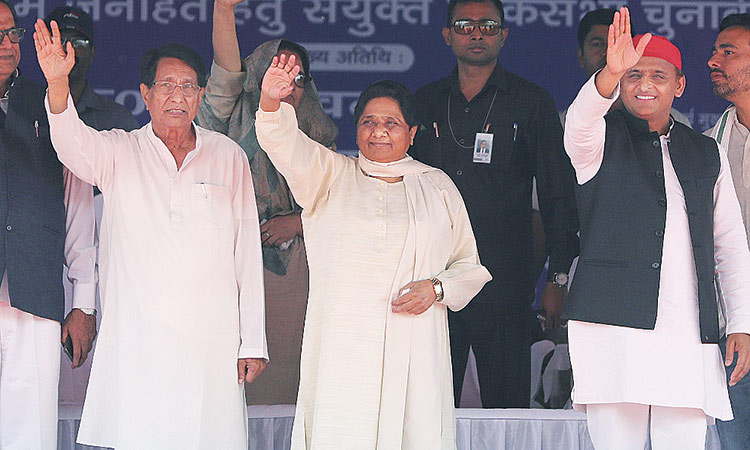 DEOBAND: BSP leader and former Uttar Pradesh chief minister Mayawati on Sunday urged people to defeat the BJP as well as the Congress in the Lok Sabha elections, saying both had betrayed the electorate.

Addressing the first joint BSP-SP-RLD rally in the state, Mayawati also said that removing Prime Minister Narendra Modi alone would not do and that Uttar Pradesh Chief Minister Yogi Adityanath also needed to be shown the door.

“Gathbandhan is winning and the BJP is going, provided they don’t tamper with the Electronic Voting Machines (EVMs),” Mayawati said, adding that the voters would end the “drama of chowkidari.”

Modi, the BSP leader said, had not fulfilled even one fourth of the promises he made before the 2014 Lok Sabha elections that brought him to power.

The Prime Minister had also failed to protect the borders, she added, citing increasing instances of terrorism in Jammu and Kashmir in particular.

Mayawati did not spare the Congress either, calling its recently released election manifesto as ‘hawa-hawai.’

The BSP leader said that her party never issued election manifestos as she believed in talking less and delivering more.

With a large number of people in the rally being Muslims, she asked the minorities to vote en bloc for the BSP-SP-RLD alliance after accusing the Congress of trying to split the anti-BJP votes.

“If Muslims want BJP to lose, they have to stand firmly behind Gathbandhan.”

“BJP will go out of power because of their wrong doings and policies. Chowkidari and jumlebaji will not help them to win votes,” the BSP chief said.

“PM Modi has failed to deliver 1/4 of the promises he had made. Misleading the people and hollow inaugurations will not help the BJP. Thousands of crores spent on publicity by the party could have been used for the welfare of the people,” she said.

“If they were serious, they could have completed projects much before the declaration of general elections in the country. Do not allow them to come to power. They will try every trick to distract you and seek your vote, but you have to be aware. Do not fall in the trap of their manifesto,” she told the huge gathering at the rally.

She also urged the voters to remove Uttar Pradesh chief minister Yogi Adityanath along with Prime Minister Narendra Modi at the Centre.

She signed off by appealing to voters to cast their vote on polling day and not to avoid exercising their right to vote.

Urging the voters to not spoil their votes by voting for candidates who are being fielded as part of a conspiracy, she said, “Congress has fielded candidates who can help the BJP. Don’t allow your vote to be divided. Ensure victory of the alliance’s candidate.”

Congress is contesting the elections on its own in Uttar Pradesh, leading to concerns that the presence of its candidates will lead to a split in votes.

“The Congress is not strong enough to give the BJP a tough fight in the state. Only our alliance can fight the BJP,” she said, adding that her remarks were particularly addressed to the Muslim community.

In a dig at Modi, Samajwadi Party Akhilesh Yadav said that in the 2014 Lok Sabha elections, PM Modi had come before the public as the “chaiwala” and has now returned once again as the “Chowkidar.”

Akhilesh was addressing the first joint rally of the alliance between the Samajwadi Party, Mayawati’s Bahujan Samaj Party and Ajit Singh’s Rashtriya Lok Dal in Uttar Pradesh, which sends 80 members to the Lok Sabha. He said that this election was an election to create history, to bring change, elevate harmony, remove hate.

“You must have heard their leaders come and speak here. All they had to talk about was hatred. They don’t want to talk about promises. Earlier, he came as chaiwala and now, he has returned as the chowkidar. As the chaiwala, he promised Rs 15 lakh in every account, he promised crores of jobs, but did nothing,” Akhilesh said.

Taking at dig at the PM’s Main Bhi Chowkidar campaign, he said, “One-by-one, we’ll defeat all the chowkidars.”