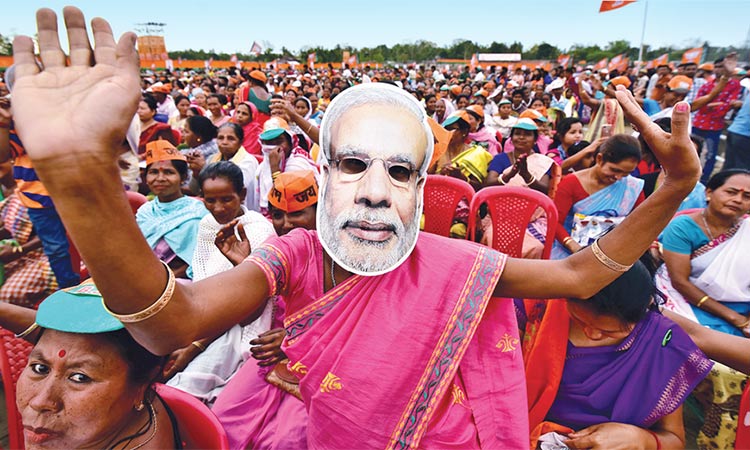 A woman, wearing a mask of Narendra Modi, attends an election campaign rally at Ahatguri village in Assam on Friday. Reuters

Prime Minister Narendra Modi on Friday thanked the government of the United Arab Emirates (UAE) for honouring him with the nation’s highest civilian honour — the Order of Zayed — for boosting bilateral relations between the two countries.

“I would like to thank the government of UAE and people of UAE for honouring me with the Zayed medal. This is not an award given to Modi but to the Indian people,” he said at a rally in Uttar Pradesh’s Amroha.

Separately, the release date of “PM Narendra Modi” has been set for April 11, when the Lok Sabha elections begin, the makers announced on Friday.

The announcement comes just a day after the film’s makers deferred its release from April 5, following the Supreme Court’s decision to set the date to hear a plea seeking to block the movie’s release, for April 8.

Actor Vivek Anand Oberoi, who plays the titular role in the film, tweeted: “Thank you to each and every one of you for your blessings, love and support. Thank you to the Indian judiciary. We hope you like the film and that it inspires you all! Jai Hind.”

Directed by Omung Kumar, the film narrates the story of Modi from his humble beginnings to becoming the Prime Minister.

Earlier, Ssingh and other makers of “PM Narendra Modi” received flak for planning to release the movie on April 12, just a day after the first phase of voting for the Lok Sabha elections. Its release date was then preponed to April 5.

However, a plea by Aman Panwar, a Congress spokesman, contends that the release of the Modi biopic ahead of the election would disturb the level playing field.

Senior journalist Nishikant Singh Sapam on Friday joined the Bharatiya Janata Party at the party headquarters in in Delhi in the presence of Finance Minister Arun Jaitley.

Soon after his induction, Jaitley said: “Sapam ji is among the influential citizens of Manipur. He is publisher and owner of the most circulated English and Manipuri daily Sangai Express of Manipur.”

Sapam said he was encouraged by the leadership of Prime Minister Narendra Modi and also the developments works carried out in the North-East region by the BJP-led governments.

Prime Minister Narendra Modi is the most popular politician in India in terms of online search with 7.24 million and 1.82 million searches for the year 2018 and 2019 respectively, according to a new study.

But the Indian National Congress (INC) managed to steal the limelight after two years as the most searched political party during December 2018, said the study by the US-based online visibility management platform SEMrush.

The results showed that Congress President Rahul Gandhi emerged as the second most searched Indian politician on online platforms with 1.5 million searches in 2019.

However, it is Congress General Secretary Priyanka Gandhi who gained popularity most rapidly between 2018 and 2019.

“We also studied trending keywords and popular questions related to leading politicians and found that the most searched question was ‘Who is Narendra Modi’,” Fernando Angulo, Head of International Partnership, SEMrush, said in a statement. The results also revealed Modi as the most active politician on Facebook with a record profile growth of 68.22 per cent between February 2019 and March 2019.

For the study, SEMrush analysed eight politicians and checked how many times people in India searched for them on Google from January 2018 till February 2019.

On social media, the firm analysed the official pages on Facebook and Twitter of the politicians and compared three factors — audience, activity and engagement.

The Bharatiya Janata Party (BJP) is banking on the popularity of Prime Minister Narendra Modi and his campaign to retain the three key Lok Sabha constituencies in India’s tech hub of Bangalore, where polling will be held on April 18 in the first phase of the 2019 general elections in Karnataka.