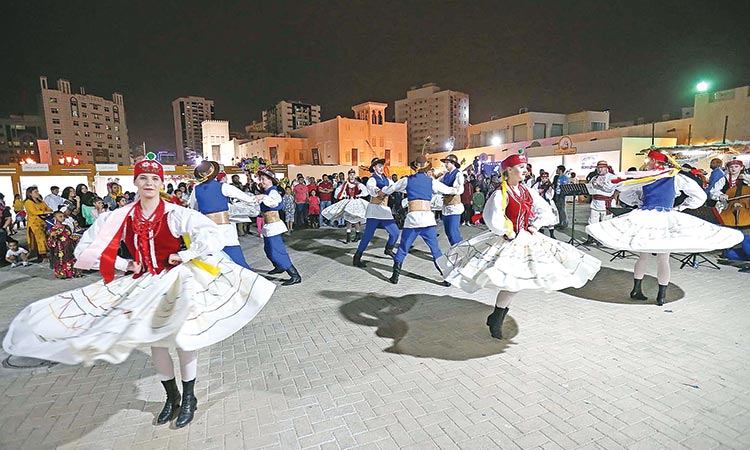 The 17th edition of the Sharjah Heritage Days will conclude its activities in the city of Al Hameriyah on Sunday. The activities aim to raise the awareness among youth and educate them about their heritage.

Sheikh Jamal Bin Abdulaziz Al Qasimi, deputy head of the Ruler’s Office in the city of Al Hameriyah opened the activities on Thursday in the presence of Dr. Abdulaziz Al Musallam, Chairman of the Sharjah Institute for Heritage, Humaid Saif Bin Samha Al Shamsi, Chairman of the Municipal Council of Hameriyah, and a number of senior officials and heritage experts.

Sheikh Jamal toured Al Hameriyah area and the Heritage Village, where he was briefed about the programmes and the activities organised within the festival.

He inaugurated the first workshops of folk culture dedicated to teach children and young people the traditional handicrafts. He handed over the participants in the workshops heritage training certificates.

Humaid Saif Bin Samha Al Shamsi said, “It is a great pleasure in Al Hamriya to witness the start of the Sharjah Heritage Days while continuing in various cities and areas in the emirate amidst this remarkable attendance.”

For his part, Mubarak Rashid Al Shamsi praised the role of His Highness Dr Sheikh Sultan Bin Mohammed Al Qasimi, Supreme Council Member and Ruler of Sharjah, in promoting and supporting the culture heritage and folk arts in the country and the entire world.

On the other hand, the annual meeting of general assembly of the International Organization of Folk Art (IOV), which was held at the Culture Palace in Sharjah, during April 1-4, 2019, concluded with the participation of delegations from 163 countries. The meeting included an opening session, a film about the International Organization of Folk Art and a report on its achievements, importance and role.

The meeting also discussed various themes, the financial report, the amendments to the organization’s regulations, and voting, and a general discussion and various interventions by Vice President Hans Holz and Vice President Emma Chen.

The meeting also discussed a range of issues, ideas and initiatives that would further improve the work of the IOV.

The audience of Sharjah Heritage Days overwhelmingly interacted with the performance of the Greek, Panamanian and Polish folk art groups in a remarkable way over the past three days on the large stage.

Dr. Abdulaziz Al Musallam, Chairman of the Sharjah Institute for Heritage and of the Higher Organising Committee of Sharjah Heritage Days said, “Every year, with the launch of Sharjah Heritage Days, we live beautiful days that bring us to a different and authentic world. Through it, we recall that past which is a key element of our identity. Sharjah Heritage Days is always offers open and permanent invitation for everyone to visit, where visitors find what he is pleased to see, which takes them to a world we still love. Through the festival, we strive to educate the youth about the authenticity of the past and to enable them to explore that time with its customs and traditions that express the folk of the ancestors.”

Sharjah Heritage Days is a magnificent cultural event within a lively, vivacious and entertaining atmosphere. This annual event is organized by the Directorate of Heritage, Department of Culture and Information and coincides with UNESCO’S celebrations of the Heritage International Day during the month of April every year.

In the celebrations we remind our current and future generations of the genuineness of the past and throw light on the customs, professions and traditions of the forefathers of this region. Sharjah Heritage Days are also a real expression of the identity of our people and a living embodiment of Emirati people’s history.