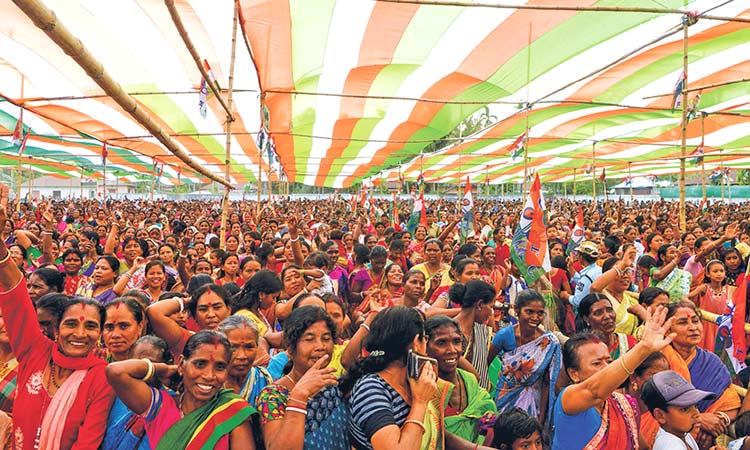 Supporters of the Trinamool Congress party attend an election campaign rally of Mamata Banerjee in Naxalbari on Friday. Agence France-Presse

Out of 18 candidates across parties contesting from the two north Bengal seats — Alipurduar and Coochbehar — in the first phase of the Lok Sabha elections, Trinamool Congress’ Paresh Chandra Adhikary is the only crorepati (millionaire), while six have declared criminal cases against themselves, said a study released here on Friday.

Trinamool Congress candidate for Coochbehar, Paresh Chandra Adhikary, who had changed over from All India Forward Bloc, has declared assets worth more than Rs 4 crore, while average assets per candidate contesting in the two north Bengal constituencies in the first phase is Rs 55.63 lakh based on their self-sworn affidavits, according to an analysis done by the West Bengal Election Watch and Association for Democratic Reforms.

Alipurduar and Coochbehar will go to the hustings in the first phase of polls on April 11.

“Out of 18 candidates analysed, six have declared serious criminal cases against themselves,” the study said.

The two BJP candidates, John Barla for Alipurduar and Nisith Pramanik for Coochbehar have declared that they have criminal cases against them.

Accusing the BJP-led government in Assam of trying to convert genuine Indian citizens to foreigners in their own country, West Bengal Chief Minister Mamata Banerjee on Friday said that only the All India Trinamool Congress (AITC) has stood by the 40 lakh people of Assam whose names were left out of the National Register of Citizens (NRC).

Banerjee said this while addressing a huge public rally at Dhubri which is located along the Bangladesh border. She said that both the NRC and the Citizenship (Amendment) Bill (CAB) are mere lollipops used by the BJP to fool the people of Assam.

“There was a conspiracy being hatched by the BJP to turn genuine citizens to foreigners. I was hurt when I was told that over 40 lakh people were left out from the NRC. I immediately sent some of our party legislators and MPs to Assam to take stock of the situation here. Our members were stopped in the airport and tortured but still we protested against this,” Banerjee said.

“Now the Assam government needs central forces everywhere. They (BJP) have destroyed the country and now they are coming to seek the vote once again,” she said.

“We are not in power in Assam but we raised our voice against the NRC and stood behind you when you were in trouble. You have not voted for us but still we stood behind you in times of distress,” she said. She said that while some did not find their mothers’ names in the NRC, others found their children’s names were missing.

“People resorted to committing suicide after failing to find their names in the NRC due to fear. The names of Muslims were left out from the NRC and people, including children, were kept in detention camps,” she said.

“The CAB is nothing but a lollypop doled out by the BJP. The BJP is differentiating between the Hindu Bengalis and Muslim Bengalis. I am a Hindu and I know that being a Hindu does not give the right to attack Muslims. I have read the CAB, the amendment will make you a foreigner for 6 years, then you will be given citizenship, why? “What will you do in the 6 years? What about your job, school and every essential thing. This is nothing but a conspiracy,” she said. Terming the BJP a corrupt party, the West Bengal Chief Minister said that although Assam Finance Minister Himanta Biswa Sarma was involved in the multi-crore Saradha chit fund scam, no action was taken against him.

“Modi Babu knows only to lie. He has been lying all along. He is doing all sorts of corruption in the name of chowkidar,” she said.

Saying that Assam and Bengal have always shared a close bond, Banerjee appealed to the people of Assam to vote for the Trinamool Congress.

“Vote for us for one time and we are going to raise the issue of the people in Parliament,” she said.

Voters’ priorities in West Bengal have largely been “neglected by the government in power” said a survey released on Friday, as responders rated the Mamata Banerjee-led Trinamool’s performance on three counts as “below average” on three key issues — employment opportunities, agriculture loan availability and higher price realisation of farm products.