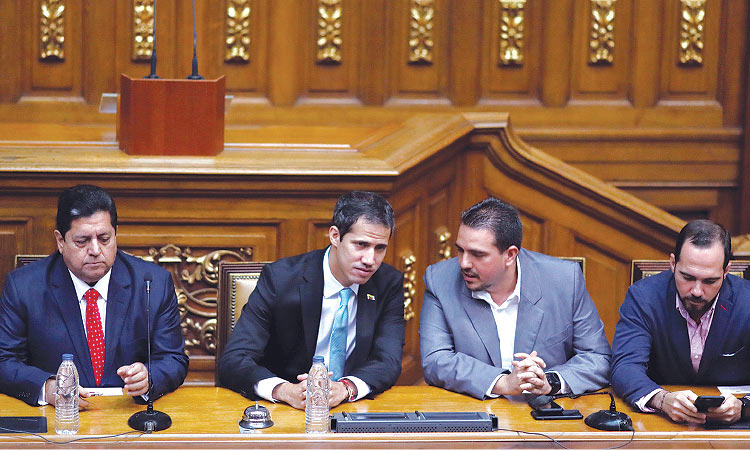 Juan Guaido attends a meeting with young leaders at the National Assembly in Caracas on Thursday. Reuters

The deputy minister also said Russian forces will stay in Venezuela as long as needed, and that there is no set period for their stay.

“The group of military specialists is (in Venezuela) in the context of our agreements and contracts for military-technical cooperation,” Interfax quoted Gil as saying.

Earlier the Kremlin said Russian military specialists are in Venezuela to service pre-existing contracts for the supply of Russian arms.

The US special representative for Venezuela said last week US Secretary of State Mike Pompeo has a list of options, including sanctions, that Washington could use to respond to the presence of Russian troops in Venezuela.

Maduro said earlier this week that classes would resume on Wednesday.

Education Minister Aristobulo Isturiz said classes, which usually end at the beginning of July, would continue until the end of that month, state-run news agency AVN reported.

“This Wednesday, children resume, with much love and enthusiasm,” Youth Minister Pedro Infante wrote on Twitter.

Classes at primary schools, high schools and universities were suspended for a week each at the beginning and end of March in the face of prolonged power outages.

As a result of the blackouts, the water pumping and telecommunications systems were also paralysed. The resumption of services has been uneven for the member of the Organization of the Petroleum Exporting Countries, with cities such as San Cristóbal, Valencia and Maracay still reporting intermittent supply of electricity.

Separately, the European Union (EU) on Thursday condemned a decision to strip Venezuelan opposition leader Juan Guaido of immunity from prosecution, calling it a “serious violation” of the constitution that undermined the chances of a peaceful solution to the country’s crisis.

“The EU rejects the decision taken by the non-recognised National Constituent Assembly to lift Juan Guaido’s parliamentary immunity,” EU diplomatic chief Federica Mogherini said, in a statement on behalf of all 28 members of the bloc.

Lawmakers in Venezuela’s Constituent Assembly, which is loyal to President Nicolas Maduro, authorised the high court to prosecute Guaido for proclaiming himself the country’s ruler.

“This decision constitutes a serious violation of the Venezuelan Constitution, as well as of the rule of law and separation of powers, as the only body authorised to lift the immunity of members of the parliament is the National Assembly,” Mogherini said.

“These acts undermine a political way out of the crisis and only lead to further polarisation and escalation of tensions in the country.” Guaido, the speaker of the opposition-controlled National Assembly, declared himself interim president in January as Venezuela’s economic and political crisis plunged new depths − a move recognised by more than 50 countries, including many from the EU.

Mogherini called for Guaido’s “constitutionally mandated” immunity to be respected, saying he must not be detained or intimidated.

In yet another development, the top White House economic advisor said on Wednesday that the US is prepared to pump dollars into Venezuela to fortify its economy if  Maduro leaves,

Larry Kudlow told reporters that Washington is already working with banks and the International Monetary Fund on a rebuilding plan to revitalize the country’s crushed economy and said that, when the time comes, “we will be moving as fast as we can.” “We call it Day Two,” he said at a briefing arranged by The Christian Science Monitor newspaper.