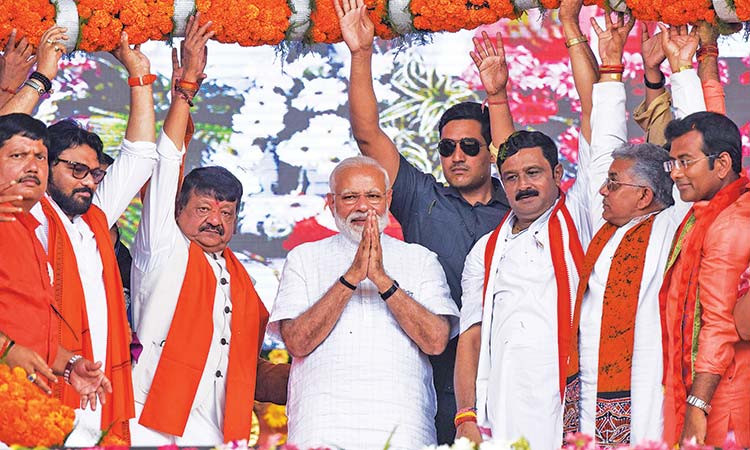 Narendra Modi gestures during a campaign rally in Kolkata on Wednesday. Agence France-Presse

KOLKATA: Prime Minister Narendra Modi on Wednesday launched a blistering attack on the Nehru-Gandhi family, accusing it of running “dynastic rule under the disguise of democracy for 55 years since the country’s Independence” and urged people to re-elect the Bharatiya Janata Party (BJP) government that has made many “impossible possible” in the last five years.

Without naming the family, Modi said the dynasty politics practiced by them “strangulated the aspirations of the youth, destroyed the dreams of the poor and poisoned the atmosphere of brotherhood with communalism.”

“Dynasty ruled the nation in the disguise of democracy. There was dynastic rule in India for 55 out of 72 years since its Independence. Democracy has prevailed for 15-16 years at most.

“It is a big question that why is this country not placed among the top nations in the world in spite of having no dearth of talent, innovation and hard work,” Modi said while addressing a rally at the Brigade Parade Ground here on Wednesday.

“The dynastic rule of 55 years throttled the youth forces in the country. Corruption strangulated the hard work, it destroyed the dream of the poor by doing vote bank politics. It polluted the atmosphere of brotherhood with the poison of communalism and diminished the valour of the army,” he said.

Modi heavily on Congress party accusing it of “being soft” on terrorism in order to appease its vote bank and claimed the party is “openly supporting” terrorists and separatists in its greed to come back to power.

“Congress has always bowed its head before terrorism due to its policy of appeasement and to satisfy its vote bank. It has been soft on terrorism. Do you remember who abolished the Terrorist and Disruptive Activities Prevention (TADA) Act? It was Congress. Remember, Congress always made false promises in the name of taking action against the terrorists and Maoists,” Modi said.

“Now they are openly supporting terrorists and separatists in the greed of ascending to power. Trinamool Congress, which emerged from Congress is also party to this crime,” he said standing at Trinamool Congress supremo Mamata Banerjee’s home turf.

Criticising the Congress for promising to amend the Armed Forces (Special Powers) Act (AFSPA), Modi said such statements by the party will encourage terrorists and those sitting in Pakistan.

“Congress is making statements which will help and encourage the terrorists sitting in Pakistan. Why is Congress toying with country’s security and creating unrest like this? As soon as I started using the word ‘Chowkidar’, some leaders in Congress got angry with all the ‘Chowkidars’. That’s why they are taking such steps against the Army,” he alleged.

He said the Congress manifesto has come out with a “prefixed expiry date” of May 23, when the results of the 2019 Lok Sabha polls will be announced.

“Congress will go down and so will their manifesto. People have already given it their stamp,” he said.

Taking a dig at West Bengal Chief Minister Mamata Banerjee and her nephew Abhishek Banerjee, Modi said that Bengal, which once showed the way to the entire nation, was now suffering under the pressure of the dynastic rule of “aunt and nephew.”

“Bengal is also suffering under the pressure of dynastic rule. Aunt and nephew are together looting the resources of Bengal and doing injustice to the people,” the Prime Minister said.

Giving an account of the significant achievements of his government in the last five years, Modi said the current regime has proved that it has the will power to make all the “impossible possible”.

“Starting from surgical strike, air strike or the strike on the space satellite, India is doing things that we only dreamt of five years ago. Did anybody ever think of getting income tax exemption on annual income of up to Rs5 lakh or 10 per cent reservation for the poor,” he asked.

“Did anyone think that corruption charges on the family that considers themselves to be the destiny makers of India could be probed? But now the whole family is on bail because impossible is now possible,” Modi said, taking a veiled dig at the Gandhi family.

Ridiculing Mamata Banerjee’s mega anti-BJP rally in Brigade on Jan.19 where leaders of 23 opposition parties came on one stage as a “function,” Modi said people from different states came together with the agenda of ousting him.