May under pressure to go for soft Brexit - GulfToday

May under pressure to go for soft Brexit 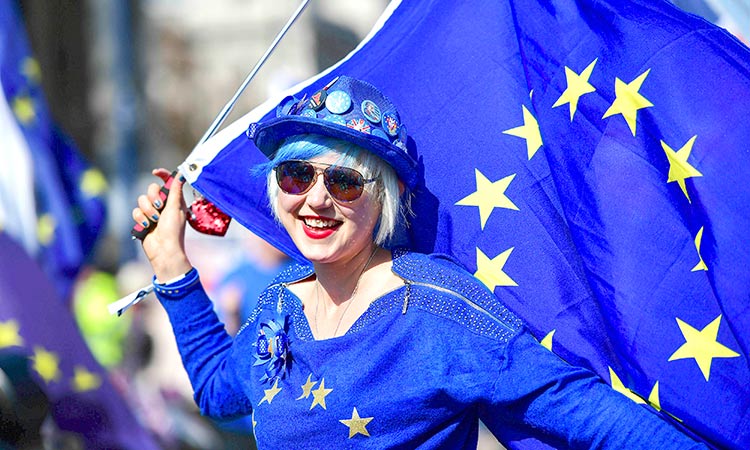 A woman holds a EU flag outside the Houses of Parliament in London on Monday. Associated Press

LONDON: Parliament was to again try to take control of Britain’s departure from the European Union (EU) on Monday, with some lawmakers hoping to force Prime Minister Theresa May to drop her Brexit strategy and pursue close economic ties with the bloc.

May’s deal, which has been defeated by lawmakers three times even after she promised to step down if it passed, was further dented when her own parliamentary enforcer said a softer Brexit was inevitable after she lost her majority in a 2017 election.

Three days after the date on which Britain was originally due to leave the EU, it was still uncertain how, when or even if the United Kingdom would ever say goodbye to the bloc it first joined 46 years ago.

The third defeat of May’s divorce deal left one of the weakest leaders in a generation facing a spiralling crisis over Brexit, the United Kingdom’s most significant move since World War Two.

Underlining how uncertainty is hurting business, the UK head of German industrial giant Siemens, Juergen Maier, said Britain was wrecking its reputation for stability and he urged lawmakers to back a customs union with the EU.

Parliament was to vote on different Brexit options on Monday, possibly showing a majority backing for a customs union, and then May could try one last roll of the dice by bringing her deal back to a vote in parliament as soon as Wednesday.

May’s government and her party, which has grappled with a schism over Europe for 30 years, was in open conflict between those pushing for a customs union with the EU and eurosceptics who are demanding a cleaner break with the bloc.

May’s chief whip, responsible for party discipline, said the government should have been clearer that May’s loss of her majority in parliament in a snap 2017 election would “inevitably” lead it to accept a softer Brexit.

“The government as a whole probably should have just been clearer on the consequences of that,” Julian Smith told the BBC in an interview published on Monday.

“The parliamentary arithmetic would mean that this would be inevitably a kind of softer type of Brexit,” said Smith, who also said ministers had tried to undermine the prime minister.

Their behaviour, he said, was the “worst example of ill-discipline in cabinet in British political history.”