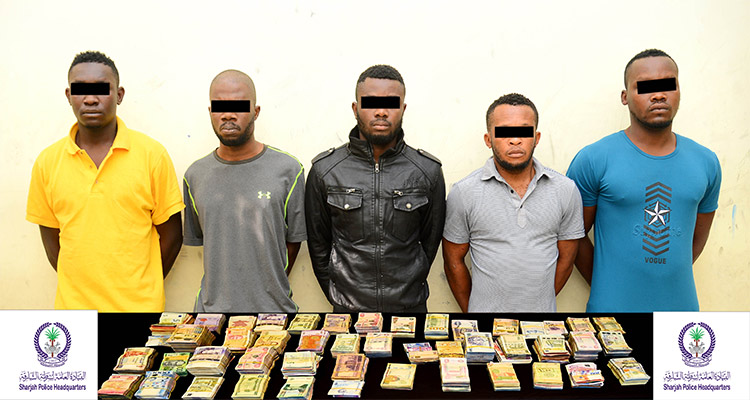 The five-member gang in police custody with the stolen money.

SHARJAH: The Sharjah Police have arrested a gang of five African nationals who attacked and robbed a money exchange located in Al Ta’awun area of Sharjah last week.

Col. Ibrahim Musbah Al Ajel, Director of CID at Sharjah Police, indicated that the operation room received a tip-off on a robbery at an exchange shop carried out by a number of persons believed to be Africans.

Immediately, competent teams from the CID led by director and another team from the Crime Scene Department from Al Buhairah Police Station rushed to the site of the crime, Al Ajel added.

He said, “Through the preliminary information collected at the scene, it was found out that five persons believed to be African nationals stormed the shop, broke the glass barrier between the shop's employees and the customers, threatened the employees, snatched all the money they had and fled the scene.”

The security teams instantly initiated the investigation into the incident to identify the assailants, prosecute and arrest them, he added.

Al Ajel continued, the investigation led the security teams to identify two of the suspects, who were traced and arrested. During the interrogation, the suspects confessed to their involvement in the crime in complicity with three countrymen. The entrusted security team continued the search for the other suspects. It was learned that two of them were in Ras Al Khaimah. They were arrested following the coordination with the authorities in the emirate. The fifth suspect was arrested in Sharjah, he said.

On questioning the assailants, they confessed to conniving to storm the exchange shop and rob it.

The security teams recovered most of the stolen money of local, Arab and foreign currencies.

Three of the suspects were residing in the country, while the other two were on visit visas.

Based on the confessions of the suspects, they were detained and referred to the Public Prosecution in Sharjah for further legal action.