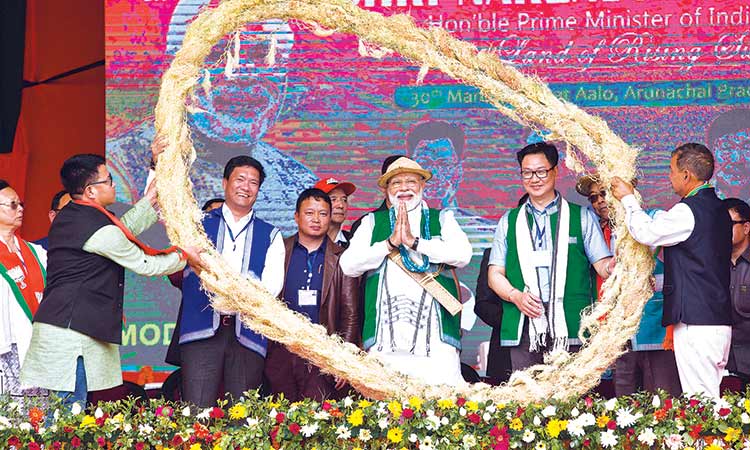 Aalo: Prime Minister Narendra Modi on Saturday accused the Congress of siding with corruption and sought to differentiate between “55 years of power pleasure” and “five years of service to the people.” Modi said at a BJP rally here in central part of Arunachal Pradesh that he has been trying to build a new India for the last five years.

“There is a difference between 5 years of service to the people and 55 years of power pleasure. The Congress takes the side of corruption − whether it is in government in Delhi or in any state,” he said.

Drumming up support for his party candidates contesting the two Lok Sabha seats − Arunachal East and Arunachal West and for the 60-member Arunachal Pradesh Assembly − Modi said, “It is an old habit of the Congress of taking the people of the country for granted.” Union Minister of State for Home Kiren Rijiju is seeking re-election from Arunachal West.

Alleging that Congress leaders do not care for the people of Arunachal or their emotions, Modi said, “I have been trying to build a new India for the last five years. I am happy that I have been able to make Arunachal the driving engine of New India.” “This Chowkidar has got the opportunity to bring Arunachal to the railway and aviation map after seven decades of independence. I have also got the opportunity to connect Delhi with the Express train to Arunachal after seven decades,” he said.

Accusing the Congress of speaking the language of the leaders of the terrorist organisations, Modi said, “You saw their (Congress) attitude during the surgical strikes and when India killed terrorists on their turf. When our scientists impress the world, they (Congress leaders) mock them. They discredit everything the Indians are proud of. They treat terrorists as their own. They are all praised in Pakistan.” Modi said that the whole country was happy with India’s bombing of the terrorist camp in Pakistan but not the Congress and also the terrorists.

“The Indian armed forces for the first time killed the terrorists in their own territory. While the whole world stood by India, the Congress family have lost their sleep,” Modi told an election rally earlier in Assam’s Dibrugarh district.

“Recently our scientists made significant achievements in space technology and we became the fourth nation to have such technology,” he went on.

“But the Congress leaders were in tears. Today India is walking together with the superpowers of the world and the Congress is worried,” he said.

“Now you have to decide whether you want a strong government or a government run by people stained (by allegations of corruption),” he said.

Showering appreciation for the Moran community, the prime minister said that India cannot strengthen itself unless Assam was strengthened.

Modi also slammed the earlier Congress government for what he said was its apathy towards the tribals in the tea community. “They do not like this chowkidar but they also don’t like the chaiwala. They don’t even like to look into the eyes of the chaiwala. Only this chaiwala can understand the pain of the chaiwala,” he said.

He was clearly referring to some of the flagship schemes launched by the BJP government in Assam for the benefit of the tea tribes.

Modi alleged that various development projects got delayed when the Congress ruled Assam. “It is our government that has completed many of the long delayed projects.” The prime minister slammed the Congress for the Assam Accord and said that his government was working to ensure its implementation.

“Our government is also seriously considering a proposal to grant ST status to six communities of Assam. However, in doing so we will ensure that none of the existing tribals are affected,” he added.

National Conference President Farooq Abdullah said on Saturday that Prime Minister Narendra Modi was pressing buttons for everything including the A-Satellite missile to portray himself as some kind of a Hanuman.