US under fire at UN over Golan Heights decision - GulfToday

US under fire at UN over Golan Heights decision 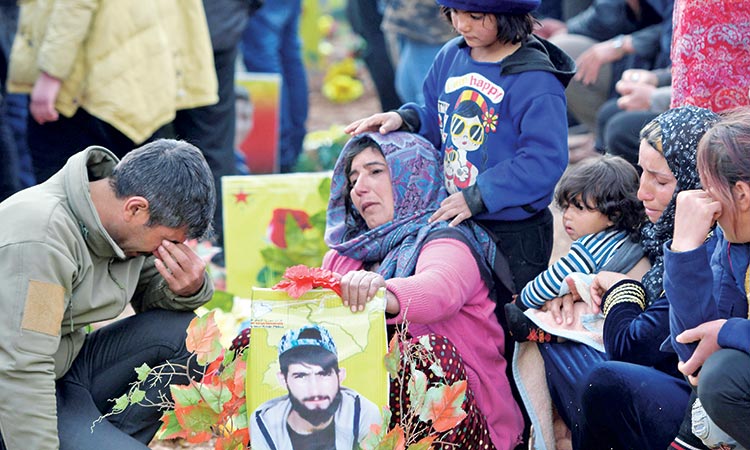 Relatives of a fighter of the SDF who was killed in an attack mourn during his burial in Kobane on Wednesday. Agence France-Presse

UNITED NATIONS: The United States faced sharp criticism on Wednesday at the UN Security Council over its decision to recognise the Golan Heights as Israeli territory, which big powers denounced as a violation of UN resolutions.

President Donald Trump signed a proclamation on Monday in which the United States recognised Israel’s annexation of the strategic plateau that it seized in 1967 and annexed in 1981.

Britain, Washington’s closest ally, said the decision was in violation of Resolution 497 that declared Israel’s annexation of the Golan as “null and void.”

France warned that any attempt to turn away from international law was “doomed to fail” as the United States prepares to unveil its Middle East peace proposals.

Russia appealed to governments to reject the US decision and to continue to view the Golan as Israeli-occupied territory.

“If anybody feels any temptation to follow this poor example, we would urge them to refrain from this aggressive revision of international law,” said Russian Deputy Ambassador Vladimir Safronkov.

The council was meeting at the request of Syria, which in a letter to the council called the US decision a “flagrant violation” of UN resolutions.

Three Security Council resolutions call on Israel to withdraw from the Golan, which it seized from Syria in the 1967 Six-Day War and annexed, in a move that was not recognized internationally.

“The Syrian government has over the past eight years grossly violated the international laws of war and is responsible for grave war crimes and crimes against humanity,” he said, referring to the long-running Syrian civil war.

US Secretary of State Mike Pompeo said earlier on Wednesday that Washington’s decision would help resolve the Israeli-Palestinian conflict by removing uncertainty.

The United States defended its decision, arguing it bolstered Israel’s security and could contribute to the stability of the entire Middle East by keeping Syria and its Iranian ally in check.

To allow the Golan to be controlled by Syria “would turn a blind eye to the threats emanating” from Damascus and from Iran and its Hizbollah allies that want to use the Golan to attack Israel, said US diplomat Rodney Hunter.

Despite its decision to recognise Israeli sovereignty over the Golan, the United States called for a UN peacekeeping mission deployed in a buffer zone there to remain in place.

The 1,000-strong UN Disengagement Observer Force (UNDOF) was dispatched to a buffer zone between Israel and Syria in the Golan in 1974, tasked with monitoring a ceasefire.

Trump’s decision prompted speculation that Washington would seek to end the UNDOF mission when its mandate comes up for renewal in June.

“This announcement does not affect the 1974 Disengagement Agreement, nor do we believe it undermines UNDOF’s mandate in any way,” said Hunter, adding that UNDOF “continues to have a vital role to play in preserving stability between Israel and Syria.”

China recalled that UN resolutions declare the Golan as a territory occupied by Israel, with Deputy Ambassador Wu Haitao adding that “China is opposed to any unilateral action that attempts to alter that fact.”

“China does not want to see tensions in the region to escalate,” he added.

Germany took a swipe at Syria for invoking international law, accusing it of blatantly disregarding UN resolutions by attacking schools and hospitals during eight years of war.

After Trump recognised occupied Jerusalem as Israel’s capital, a group of Arab countries presented a resolution condemning the decision to the General Assembly, which won overwhelming support.

UN diplomats were awaiting the outcome of an Arab League summit in Tunis on Sunday that could lead to action at the United Nations to counter the US decision on the Golan.

Meanwhile, Amnesty International accused Syria’s government and its Russian allies Thursday of striking medical facilities and a school in rebel-held Idlib province with air and artillery strikes over the past month.

After eight years of war, “the Syrian government continues to show utter disregard for the laws of war and the lives of civilians,” it said in a statement.