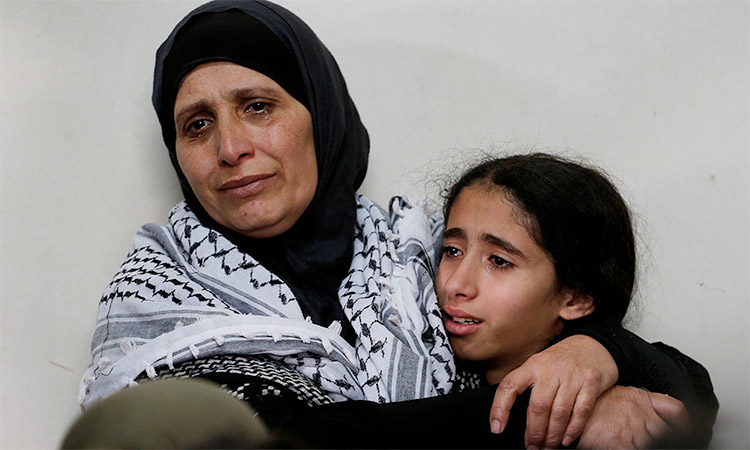 Relatives of Sajid Muzher mourn during his funeral in Bethlehem on Wednesday. Reuters

WEST BANK: A Palestinian volunteer medic was killed by Israeli forces during clashes in the occupied West Bank on Wednesday, the Palestinian health ministry said.

Sajid Muzher, 17, was killed in the Dheisheh refugee camp near Bethlehem in the southern West Bank, the ministry said.

He was shot by Israeli forces while volunteering as a medic, a ministry spokesman said.

The Israeli army did not comment on the death but said troops were responding to a “violent riot.”

In a statement, Palestinian health minister Jawad Awad said the “occupation’s killing of a volunteer medic by shooting him in the stomach is a war crime.”

The Palestinian Medical Relief Society confirmed he was working with them, saying in a statement he was shot while trying to treat a person wounded in clashes.

In a statement, the army said that during “operational activity in Dheisheh Refugee Camp, southwest of Bethlehem, a violent riot was instigated.” “Dozens of rioters hurled blocks and firebombs at the troops, who responded with riot dispersal means.”

It said it had received a report regarding an injured Palestinian, without further details.

The World Health Organization “strongly condemned” the killing in a statement, saying the man was killed while providing care to the injured.

“We are saddened by this tragic loss. Health workers provide critical care and save lives. Their protection must be ensured,” said Gerald Rockenschaub, head of the WHO office for the West Bank and Gaza.

Omar Shakir, Human Rights Watch country director, said that if confirmed the death “would mark at least the fourth clearly identifiable Palestinian medic gunned down by Israeli forces in the last year.”

“Routine unlawful killings by Israeli forces and full impunity in Israel highlight the need for the International Criminal Court to open a formal probe into serious crimes committed in Palestine,” he said. Meanwhile, calm returned on Wednesday after Palestinians in Gaza fired three rockets at Israel overnight, prompting retaliatory fire from Israel and threatening a Hamas-declared truce.

On Wednesday, Hamas leader Ismail Haniyah, speaking from the rubble of his office destroyed by an Israeli air strike earlier in the week, said “I salute all parties that sought to stop the Zionist arrogance towards the Gaza Strip.”

“We stress that we will rebuild the movement’s headquarters, and this is a symbol of steadfastness,” he said.

Calm prevailed throughout Tuesday, with Hamas claiming Egypt had brokered a ceasefire, but as night fell Israel said a rocket was fired from Gaza.

In response, a military statement said “fighter jets struck several terror targets in the southern Gaza Strip, including a Hamas military compound and a weapons manufacturing warehouse in Khan Yunis.”

A Palestinian security source said an air strike hit a Hamas military base in Khan Yunis, in southern Gaza.

Shortly before midnight (2200 GMT Tuesday), the army reported a second rocket attack, this time on an industrial zone on the edge of the Israeli coastal city of Ashkelon. Hamas, its main Gaza ally Islamic Jihad and smaller groups took pains to disassociate themselves from the incident.

“The rocket that hit near Ashkelon was the work of an individual and the factions are committed to calm” as long as Israel is, they said in a joint statement.

Early on Wednesday, Israel struck back.

Before dawn, another rocket was fired at Ashkelon but was brought down by Israeli air defences, the army said.

Isareli Prime Minister Benjamin Netanyahu, who cut short a high-profile visit to the United States to take charge of Israel’s response, said on Tuesday: “We are prepared to do a lot more. We will do what is necessary to defend our people and to defend our state,” he told the annual conference of US pro-Israel lobby group AIPAC by satellite link.