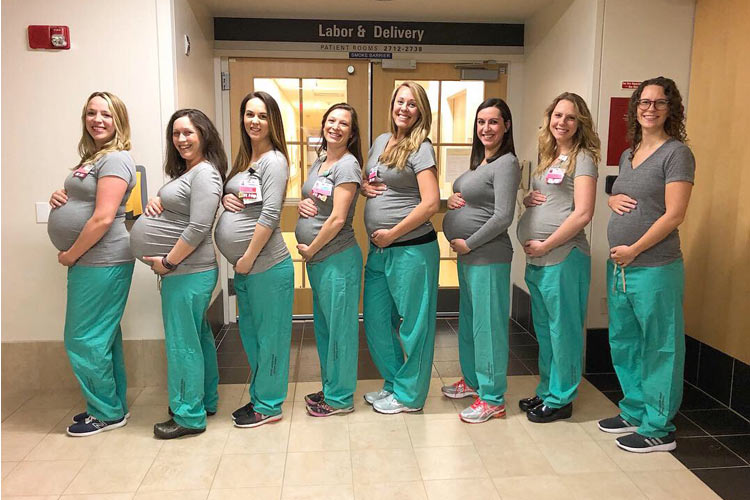 The army of infants is expected to arrive between April and July. Courtesy MMC

PORTLAND: Nine nurses who work in the labour and delivery unit at the largest hospital in Maine are expecting babies in the next few months. Maine Medical Centre (MMC) announced the bonanza of babies with a Facebook post on Monday featuring eight of the nine nurses and their respective bumps.

The army of infants is expected to arrive between April and July. The Portland hospital’s photo showed the nurses wearing their hospital scrubs and holding cards indicating their due dates. There were pinks and blues among the cards, along with two yellows and a green.

The nurses are supporting each other during their pregnancies. WMTW-TV reports they plan to be there for each other’s deliveries. The hospital says all nine of them are registered nurses.

MMC Registered Nurse Erin Grenier started wondering if something really was in the air at labor and delivery when the fourth of her colleagues announced her pregnancy. Grenier is the first of nine nurses on the L&D floor who are expecting babies between April and July of this year.

“I guess I started a trend!” Grenier joked.

Some of the nurses are second, or even fourth-time moms. Others are first-time moms. All say their experience working with each other, and helping other mothers deliver their children, is preparing them well for what’s ahead.

“Everywhere we look, there’s someone who’s an expert!” Spear said.

Six of the nurses work the same weekend shift. With several months to prepare, the hospital has proactively planned to cover all those shifts. More than anything, the baby boom has become a bonding experience.

“I think it’s comforting knowing we’re all in this together,” Giglio said.

On March 23, eight of the nine nurses got together for a photo that they posted on social media. It quickly went viral. They’re looking forward to taking another photo of all nine of them together with their babies in the fall.