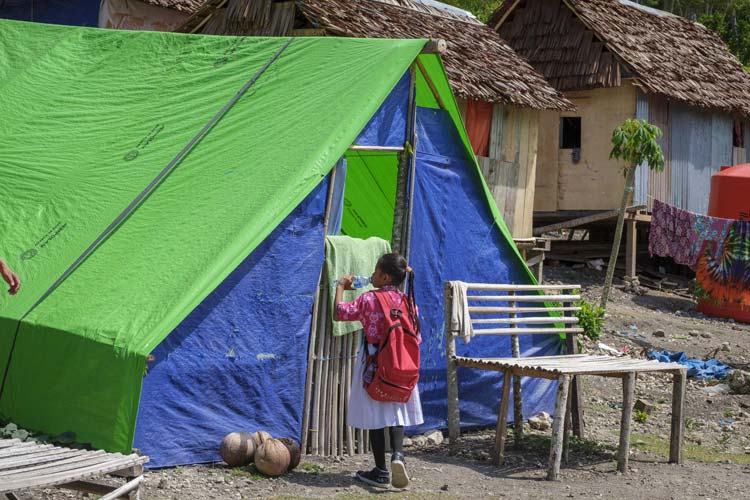 Thousands of Indonesian children are still living in makeshift shelters six months after a devastating quake-tsunami pounded the city of Palu.

JAKARTA: Thousands of children are living in makeshift shelters six months after a devastating earthquake and tsunami pounded the Indonesian city of Palu, aid agencies said Tuesday, as authorities wrestle with a "painfully slow" recovery.

At least 170,000 residents from Palu and surrounding districts are still displaced and entire neighbourhoods are still in ruins, despite life returning to normal in other areas of the city.

"Six months after this disaster we are extremely concerned about the estimated 6,000 children still living in temporary accommodation such as tents, as well as the thousands more that are living in homes that have been damaged.

Authorities continue to deal with a "painfully slow" recovery.

The magnitude 7.5 quake and a subsequent tsunami razed swathes of the city on Sulawesi island on September 28, killing some 4,340 people, according to the disaster agency.

Sri Budiatmi, 42, a mother of three and a grandmother of a 5 month-old, with her daughters Yusril, 14, and Yuli (R), 10, at their makeshift camp in Palu, central Sulawesi.

At least 170,000 residents from Palu and surrounding districts are still displaced.

Salsa, 10, and her parents have lived in a tent with a dirt floor ever since the towering waves tore through their home in Donggala near the epicentre of the quake.
"The light here is from a battery lamp," the fifth grader said.

"Often when we sleep there are a lot of mice."

Monsoon rains have fanned outbreaks of malaria and dengue fever, while residents in hard-hit areas have been forced to navigate open sewers and mounds of sharp rubble.

The force of September's quake saw entire neighbourhoods levelled by liquefaction -- a process where the ground starts behaving like a liquid and swallows up the earth like quicksand.

The Red Cross said recovery has been "painfully slow" and often complex.

"How can you rebuild a coastline, city or community when large parts of it are simply swallowed by the earth?" said the organisation's chief Indonesia representative Jan Gelfand.

Apart from the damage to tens of thousands of buildings, the disaster destroyed fishing boats, shops and irrigation systems, robbing residents of their income.

"People in affected communities need a regular source of income to sustain themselves and regain a sense of normalcy.

Indonesia has said the damage bill in Palu topped $900 million. The World Bank has offered the country up to $1 billion in loans to get the city back on its feet.
The vast Southeast Asian archipelago is one of the most disaster-prone nations on Earth due to its position straddling the so-called Pacific Ring of Fire, where tectonic plates collide.

Last year was a particularly tough, however, with more than 2,500 disasters ranging from a series of deadly earthquakes on Lombok island to landslides and volcanic eruptions.