Millions of women, homeless ‘left behind’ ahead of elections - GulfToday

Millions of women, homeless ‘left behind’ ahead of elections 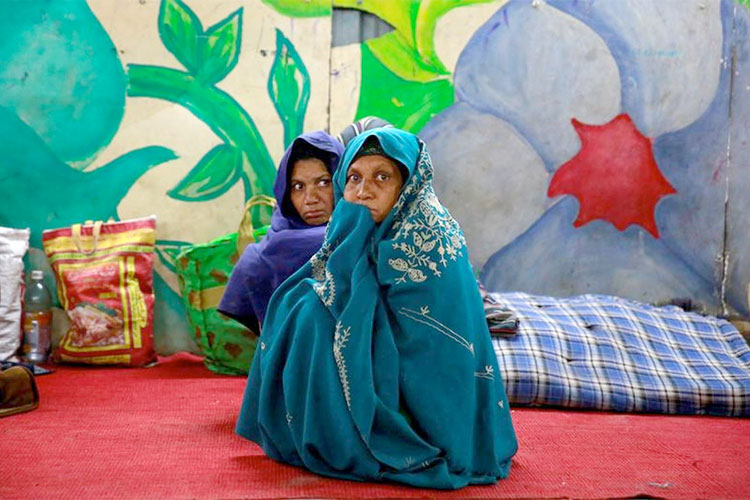 Women wrap themselves in blankets in a government shelter for homeless people to escape the cold in Delhi, India. Reuters

New delhi: Millions of women and homeless people will be barred from voting in India’s elections because of biases and difficulties in getting identification papers, human rights groups said on Tuesday, warning this would increase their marginalisation.

Every Indian who is 18 years or older has a right to vote in polls due to start on April 11, with about 900 million citizens eligible to take part.

But the country’s homeless population, who mostly live in cities and are estimated to number more than 4 million by human rights groups, are likely to be denied this right despite efforts by authorities to get them registered.

The Delhi Election Commission, whose motto is “no voter left behind”, accepts night shelters, street-lights and flyovers as temporary residences.

This enabled more than 10,000 homeless people in the capital New Delhi to receive voter identity cards in 2014, ahead of the last general election, said Ashok Pandey of Shahari Adhikar Manch, an advocacy group.

But since then only another 3,000 homeless people have been signed up.

“If they are not at the given address when they do the verification, their name is cancelled. That’s a problem because they keep moving,” he told the Thomson Reuters Foundation.

“It really should not matter that they are homeless - they are still citizens and have a right to vote,” he said.

The Delhi government is trying to reach all homeless people through non-profits working with them, said Bipin Rai, an official at the Delhi Urban Shelter Improvement Board.

“We have helped process thousands of voter ID forms. But there are also hundreds of voter IDs lying unclaimed,” he said.

A spokeswoman for the Election Commission did not respond to emails and calls seeking comment.

“A voter ID gives them an identity, and being able to vote gives them some dignity. Otherwise they are invisible,” she said.

“But the card says ‘homeless’, which brands them, and makes them feel more marginalised.” Also missing from India’s voter rolls are women, who are often barred from voting - or told whom to vote for - in many families, according to election analysts Prannoy Roy and Dorab Sopariwala.

As many as 21 million women are not on voter lists, the cumulative effect of non-registration over decades, they write in “The Verdict”, a book on India’s elections, an extract of which was published in Outlook magazine.

“It is a result of a combination of soc­ial and political factors. What is worrying is that it is worsening over time.” (Reporting by Rina Chandran @rinachandran; Editing by Michael Taylor. Please credit the Thomson Reuters Foundation, the charitable arm of Thomson Reuters, that covers humanitarian news, women’s and LGBT+ rights, human trafficking, property rights, and climate change. Visit http://news.trust.org) India opposition urges delay to Modi biopic as election looms New Delhi, March 26, 2019 (AFP) - India’s main opposition Congress party has petitioned election officials to delay the release of a flattering new Bollywood biopic about Prime Minister Narendra Modi until after upcoming elections.

Critics have said the film, due for release on April 5, is blatant propaganda and an attempt to woo voters before polls open six days later in India’s almost six-week election.

Congress, which hopes to unseat Modi in the vote, said on Monday that screening the movie, “PM Narendra Modi”, would break election laws and that it should not hit cinemas until after voting ends on May 19.

“This is no artistic venture. It is a political venture and that is what we have told the Election Commission and should not be allowed,” senior Congress figure and former minister Kapil Sibal told reporters.

The movie relates the Hindu right-wing leader’s journey from his childhood days selling tea at a railway station to becoming chief minister of his home state Gujarat and leading his Bharatiya Janata Party (BJP) to a thumping victory against the Congress in 2014 elections.

Under Indian election rules now in effect, the publication of any content deemed as campaign material − including advertisements, films and even social media − requires the election commission’s prior approval.