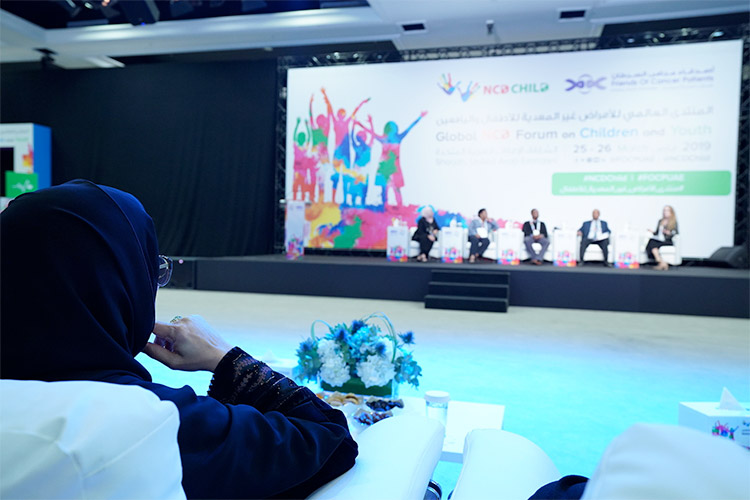 The two-day gathering of lectures and workshops attended by delegates from several countries, representing the civil society, academe, government and non-government entities as well as the youth sector was organized by the charity organization FoCP in collaboration with the NCD Child.

International coalition NCD Child promotes and supports the rights and needs of children. As it supports children sufferers of NCDs, the organization also encourages them and their families to engage in heightening everyone’s awareness on the prevention, treatments and solutions to NCDs.

In her keynote address, Sheikha Jawaher raised the forum objectives.

These are to know and work on the impact of non-medical factors including the role of family members with children with NCDs; the empowerment of families and communities towards solutions to NCDs; the strengthening of the national response to NCDs centered around nutrition, increased physical activity and the reduction of tobacco consumption; and the effectiveness of painkillers and palliative care as solutions to NCDs.

Sheikha Jawaher said: “The idea is to spread awareness and put in place effective plans to prioritize among others, solutions to NCDs among children.”

“These (NCDs) affect families who must provide a healthy environment. There should be community engagements and campaigns as well as research and academic pursuits leading to effective policies and the proper implementation of solutions,” she also said.

Sheikha Jawaher explained this further through “five pillars” while stressing that  utmost support must be extended to all children who are the future and who eventually are going to give back to the society.

Ranked as the first pillar is the requirement to change the mindset towards unhealthy and sedentary lifestyles which could be resolved within families.

The academia and research works are the second pillar which goes hand-in-hand with the third pillar, the social institutions.

Sheikha Jawaher said: “The academia and research institutes monitor the spread of (NCDs). This involves using research to advance evidence-based advocacy which is key to good policy-making for fighting NCDs.”

“The social institutions are instrumental in spearheading social movements to advocate the cause by mobilizing action groups,” Sheikha Jawaher continued.

To illustrate, Sheikha Jawaher mentioned of how Sharjah has become the first Child Friendly City in accordance to the standards of United Nations International Children’s Emergency Fund, arising from the “outstanding efforts and accomplishments in the protection and promotion of children’s rights in association with the formation of  FoCP, the Friends for Diabetes Association, and the WHO knowledge Action Portal” which have become the platforms for all NCDs concerns.

“The fifth pillar is the (provision of) palliative, medical and psychological care (which will be more effective if fully supported). This is the holistic approach to care. It is imperative in overcoming challenges.”

On behalf of the FoCP, its Board of Directors chairperson Sawsan Jafar emphasized the big role of the delegates in mobilizing initiatives towards a much healthier society with lesser incidences of NCDs.

On behalf of NCD Child, its chairperson Mychelle Farmer said that on the global level, over 40 million deaths a year are caused by NCDs from which 1.5 million are children of all ages, majority from the poor and developing countries.