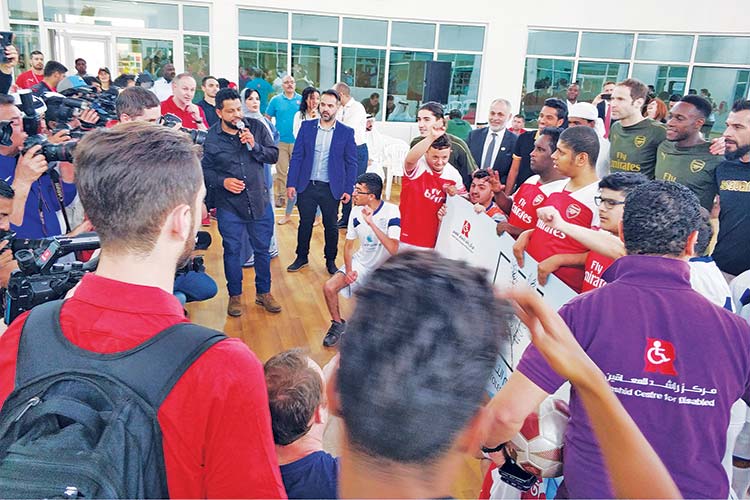 The players participated in a number of interactive sessions with the students of determination.

DUBAI: Students, staff, teachers and guests at the Rashid Centre Of Determined Ones were so delighted to see four members of the Arsenal Football Club along with members of Al Nasr Club during a half-day long visit on Monday.

The four members – Petr Cech, Hector Bellerin, Rob Holding and Danny Welbeck – visited the centre along with partners and representatives of the British Business Group, British Embassy, Emirates Airlines and members of the board of directors of the centre.

The players participated in a number of interactive sessions including planting an organic farm, friendly football practice with students with special needs and also visited different sections to review the rehabilitation programme and educational activities taking place.

A big draw was the dressing up of a long pizza with all the traditional ingredients as the players including Danny Welbeck and others posed in the style of Turkish butcher Salt Bae sprinkling salt and other ingredients for the army of photographers.

Talking to Gulf Today, Sonny S. Ridgewell, a member of the British Business Group, said that they were facilitating British businesses and companies in the Middle East and “today we are here in collaboration with the Arsenal Football Club to have a tour of the Rashid Centre. With the participation in different activities with the students the players are spreading happiness among the students with disabilities as they are showing remarkable performances in different fields,” he said.

Maryam Othman, Director General of the Centre, appreciated the visit of the Arsenal Football Club players, officials from Emirates Airlines and other partners to show their support for the students of determination. “We are lucky to have the guests including team members of Arsenal Football Club and their sponsors as well as guests from different sectors. The visit and the participation of players in different activities along with Rashid Centre students has not only increased their motivation level but also encouraged them to interact with guests more actively,” she added. Later, the Arsenal players and officials who attended the event awarded the Rashid Center shields and souvenirs.