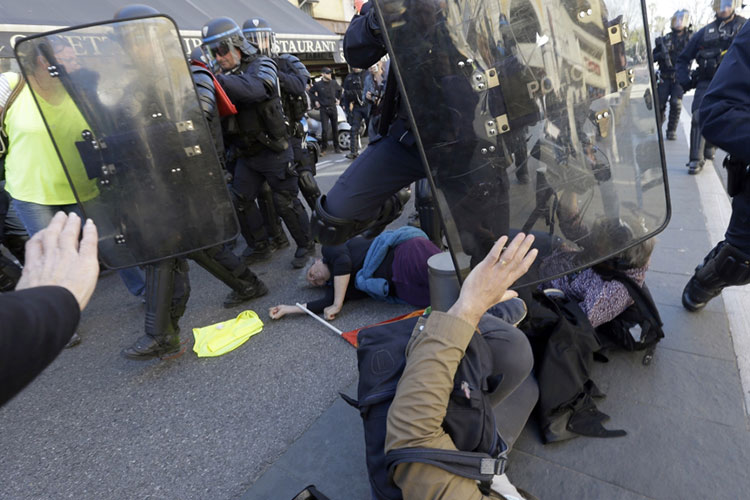 Genevieve Legay, 73, lies unconscious after collapsing on the ground during a protest in Nice, southeastern France, on Saturday.

NICE (France): French officials faced fresh questions on Sunday about the handling of the "yellow vest" protests after an elderly activist was seriously injured during a police charge in the southern city of Nice.

Prosecutors there have opened an inquiry to try to establish what happened Saturday when 73-year-old Genevieve Legay suffered head injuries.

When paramedics evacuated veteran activist Legay from the demonstration she was bleeding from the head, but still conscious, AFP journalists at the scene noted.

Her daughter later said that she had suffered several fractures to the skull and subdural haematomas.

Arie Alimi, the family's lawyer, told AFP that they would be filing a formal complaint against the authorities for violence against "a vulnerable person." The region's governor would be named in the lawsuit, to be submitted on Monday.

"The police charge was very violent," he said. "Mrs Legay ... has been very badly injured." But contrary to some reports, she was in a stable condition and not in a coma, he added.

Photos and video footage from Saturday's protest showed her carrying a rainbow-coloured flag with the word "peace" written on it.

Legay is an activist with the social justice campaign group Attac. The group published a message on its website calling for an inquiry to establish who was responsible for her injuries.

Both local prosecutors and France's justice minister Sunday pointed out that protests in some parts of the city centre had been banned.

The minister. Nicole Belloubet, was asked about the incident in an interview with French channel BFMTV.

While wishing Legay a speedy recovery, she said, ""I do find it curious all the same that when a demonstration had been banned, as was the case in Nice, someone goes with the declared intention of demonstrating in that place there."

"There were some areas, in some cities, where demonstrations were banned. Following warnings, a person who stays there is likely to commit a crime and it is in this context that the events happened."

Nice prosecutor Jean-Michel Pretre said they were doing everything they could to find out what happened.

"When you stay in a protest after the regulatory (police) warning that people have to disperse, it's a crime."

In Legay's case however, it was not clear whether she had been in the banned area, or on the edge of it, when police moved against the protesters.

Demonstrations this weekend were also banned in certain parts of Paris and in the centres of Toulouse, Bordeaux, Dijon and Rennes.

"Of the 2,000 convictions that have already taken place, the figure that should be retained is that 40 per cent are prison sentences," she said. They ranged from one month to three years, according to justice ministry figures.

The other 60 per cent of convictions involved community service, suspended sentences or other non-custodial sentences, the minister added.

Nearly 1,800 cases arising from the protests, in Paris and other French cities every Saturday since November 17, were still to be resolved and a total of 8,700 people had been detained, she said.

More than 40,000 people took to the streets across France on Saturday for the 19th consecutive week of anti-government protests, Interior Minister Christophe Castaner said.

The government redeployed soldiers from its Sentinelle anti-terror force to guard public buildings in Paris, freeing up 6,000 police in Paris to tackle any flare-ups of violence.