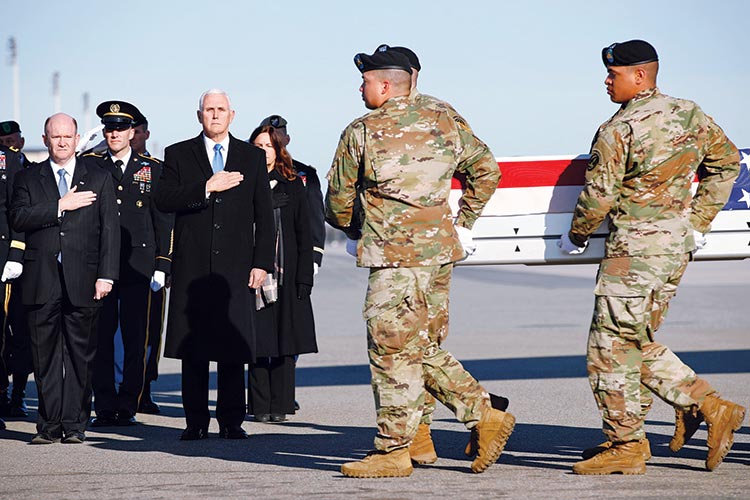 US army moves a transfer case containing the remains of a soldier at Dover Air Force base on Sunday. Associated Press

KABUL: Air strikes in the northern Afghan province of Kunduz killed about a dozen civilians on Saturday, local officials said, as battle intensified there and in southern Helmand province.

The bodies were brought into Kunduz city in the back of a truck as part of protests by dozens of civilians.

The civilian deaths occurred as Afghan and Taliban forces claimed to inflict heavy losses on each other in that province and in Helmand, two Taliban strongholds.

A spokeswoman for the Nato-led Resolute Support mission in Afghanistan did not respond immediately to questions on Sunday. Resolute Support, comprising troops from 39 countries, trains, advises and assists Afghan security forces.

The New York Times reported earlier that the air strikes that killed civilians followed a firefight between US and Afghan soldiers that had been provoked by a Taliban working inside Afghan forces. Reuters has not confirmed the paper’s report.

A record number of Afghan civilians were killed last year as aerial attacks and suicide bombings increased, the United Nations said in a February report.

Kunduz is also where two US soldiers were killed in combat on Friday. The US Department of Defence identified the soldiers as Specialist Joseph Collette, 29, and Sgt. Will Lindsay, 33.

Fighting has accelerated during a period of recurring peace talks. The latest negotiating round concluded this month with US and Taliban officials citing progress towards ending the 17-year war.

Afghan forces, with Nato air support, killed 58 Taliban, including several commanders, in Kunduz, the defence ministry said on Saturday via Twitter. The Taliban said that it had killed 19 members of Afghan forces and five from foreign forces.

Fighting was also fierce in Helmand, including more civilian deaths.

The Taliban on Saturday claimed an attack at a stadium celebration of Farmers Day in Helmand, which killed four people and wounded 31, including minor injuries to the province’s governor.