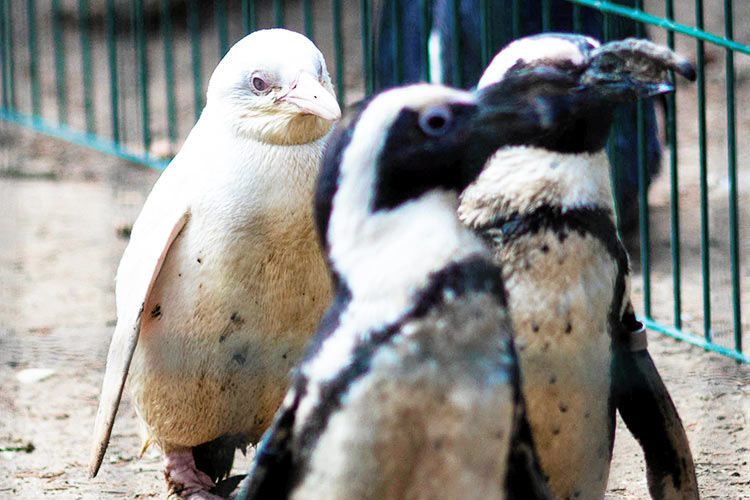 An unique albino penguin is pictured at the Gdansk Zoo.

WARSAW: A rare three-month-old albino penguin made its first public appearance at a zoo in the Polish Baltic port city of Gdansk, where its keepers claim it is the only one of its kind in captivity.

The all-white African black-foot penguin was born on December 14, but zoo staff decided to keep its arrival secret as they were unsure the vulnerable newborn would survive.

Zoo staff are waiting until they are able to determine its sex to name the youngster.

"As far as we know, there is no other such specimen alive (in captivity) in the world.

A juvenile albino penguin is presented to the public for the first time at the Gdansk Zoo in Gdansk, Poland.

Albino penguin is pictured at the Gdansk Zoo.

Its keepers claim it is the only one of its kind in captivity.

"The baby is active, in good health, eats well and, what's very important, its parents are taking very good care of it," Targowski said.

To ensure its safety, the youngster is being kept with a small group of six adults, including its parents, part of a group of 70 penguins living at the Gdansk Zoo.

"We're really doting on him so that nothing bad happens to him", Targowski, explaining that other penguins in the troop could take exception to the baby's unique look and harm it.

African black-footed penguins, also known as jackass penguins due to their braying noise, have been rated as endangered since 2010 after suffering from commercial fishing, shortage of prey and pollution.