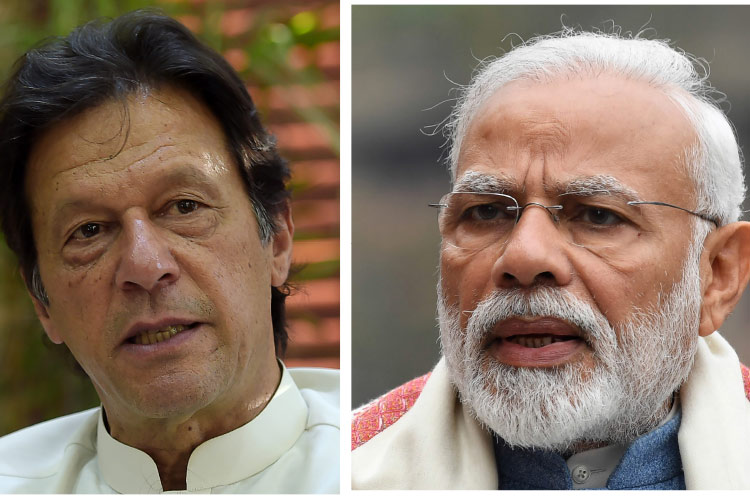 The goodwill messages came against the backdrop of recent escalation of tensions between the two countries.

ISLAMABAD: Indian Prime Minister Narendra Modi has greeted his Pakistani counterpart Imran Khan on the occasion of the Pakistan Day as both countries emphasised peace and prosperity for the region.

Imran tweeted the greetings message received from Modi. The message read: "I extend my greetings and best wishes to the people of Pakistan on the National Day of Pakistan. It is time that ppl of Sub-continent work together for a democratic, peaceful, progressive & prosperous region, in an atmosphere free of terror and violence.”

Imran responded by welcoming Modi’s message and underscoring that it was time to begin a comprehensive dialogue on all outstanding issues, including Kashmir, and forging a new relationship based on peace and prosperity "for all our people.”

Modi’s words sounded similar to what Pakistani High Commissioner to India Sohail Mahmood said in his speech at a reception hosted by Pakistan High Commission in New Delhi on the eve of Pakistan Day.

The goodwill messages came against the backdrop of recent escalation of tensions between the two countries following an attack on Indian security forces in India-held Kashmir’s Pulwama district.

The events in the last week of February took the two  neighbours closer to war than any of the standoffs between them over the past decade. In an act of aggression, the Indian Air Force (IAF) violated Pakistan’s airspace on Feb.26 and Pakistan demonstrated its will and capacity to respond by hitting an open space in held Kashmir a day later. India reportedly had also planned a missile attack on Pakistan, but international intervention prevented the situation from getting out of control.

Both sides later took a number of de-escalatory steps, including the return of high commissioners to their respective missions and initiation of negotiations on a bilateral agreement which would govern the operations of the planned Kartarpur corridor. The corridor would provide Indian Sikh pilgrims visa-free access to Kartarpur temple in Pakistan’s Narowal district.

The reception, one of the guests who attended the event said, was held in a very tense environment and a number of guests were sent back by the Indian security agencies’ sleuths deputed outside on the pretext that the Indian government had officially boycotted it.

Imran had all along the course of the crisis offered Indian peaceful settlement of outstanding issues through dialogue. However, India had on that occasion not responded to the gestures.
High Commissioner Mahmood, in his speech at the reception, said that additional steps were needed "to consolidate the process of de-escalation, and to stabilise the ties against further shocks” and reassure the citizens of the two countries that threat of war had receded.

"Diplomacy and dialogue remain indispensable for enhancing mutual understanding, addressing mutual concerns, and resolving long-standing disputes including Jammu and Kashmir,” he said, hoping that "the long winter in India-Pakistan relations” would end soon.