The Big Heart Foundation provides Dhs58m in aid for over 1,000,000 people worldwide - GulfToday

The Big Heart Foundation provides Dhs58m in aid for over 1,000,000 people worldwide 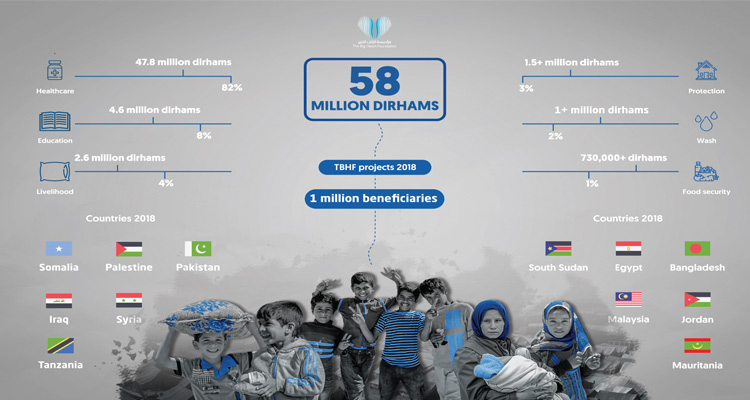 The funds focused on supporting vital sectors including education, healthcare, and food security, thereby rehabilitating underprivileged people who have lost basic amenities of life, due to conflicts, social ills, and/or natural disasters, in their respective countries.

SHARJAH: The Big Heart Foundation (TBHF), a Sharjah-based global humanitarian organisation dedicated to helping people in need worldwide, announced that it provided
total support worth Dhs58 million, to help over 1,091,000 people across 12 conflict-affected countries, in the year 2018.

The funds focused on supporting vital sectors including education, healthcare, and food security, thereby rehabilitating underprivileged people who have lost basic amenities of life, due to conflicts, social ills, and/or natural disasters, in their respective countries.

Announcing details of the contributions by the Foundation, Mariam Al Hammadi, Director of TBHF, said: "Following the directives of Her Highness Sheikha Jawaher Bint Mohammed Al Qasimi, wife of the Ruler of Sharjah, and Chairperson of TBHF, our efforts are strategically dedicated to address growing humanitarian concerns around the world, based on two key principles. First, immediate assistance to respond to the most pressing needs of affected populations. Second, bolstering vital sectors like education, healthcare, infrastructure, and community-building, which uplift underprivileged groups by making the tools they need to build their futures available to them." 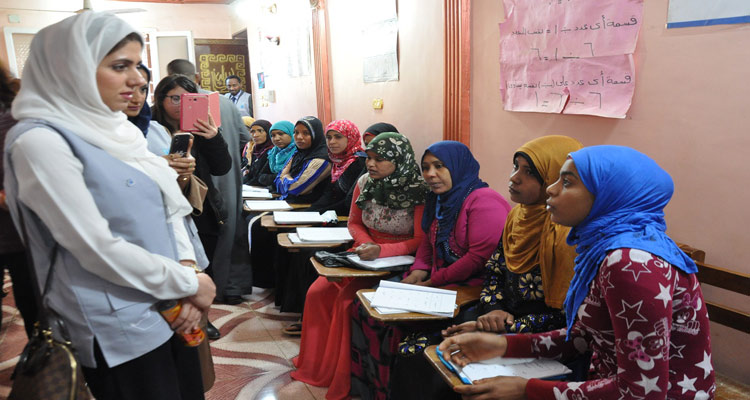 The TBHF is a humanitarian charity, that was established in 2015 after a range of humanitarian initiatives and campaigns launched by Sheikha Jawaher Al Qasimi.

The projects catered to sectors that form the lifeline for individuals and communities. Dhs47,896,662 were allocated to support and rehabilitate the healthcare sector, which is one of the most important and the most affected sectors during crisis.

TBHF also assigned Dhs4,657,500 to the education sector, which was used for rehabilitation of schools, empowering children and fulfilling the basic needs of teaching staff, ensuring access to academic training centres and organisations for everyone.

Additionally, Dhs2,654,978 were dedicated for urgent assistance to individuals and groups, in the areas affected by poverty, conflicts, and the influx of refugees. This aimed to fulfil the day-to-day needs of less fortunate people, including food, clothing, and drinking water.

TBHF also allocated Dhs1,536,234 to support activities for the protection of refugees and displaced people, in collaboration with the United Nations High Commissioner for Refugees (UNHCR) and local authorities. Also, Dhs734,636 were assigned to secure sustainable food resources for the refugees and other underprivileged people, who were affected by natural disasters in aforementioned countries. Besides, TBHF contributed Dhs1,036,302 to build sanitation systems and facilities, as well as provide drinking water in the inflicted areas.

Al Hammadi noted that TBHF cooperates with international partners to face global challenges and crisis that affect mass populations including the poor and refugees. The support is extended in form of fundamental services, such as education, healthcare, infrastructure, food security, and drinking water. The response to these critical challenges is of the highest priority to the humanitarian assistance programmes and organisations that support them.

TBHF also announced that it launched a total of six funds to support projects across the world. The MENA Fund contributed to 60 percent of TBHF’s overall contribution, given the critical conditions the region faces in view of the fierce conflicts and humanitarian crises. It was followed by the Refugees and Internally Displaced Persons (IDP) Fund, which contributed 17 per cent, Ameera Fund granted 16 percent, while Zakat Fund, Palestinian Children Fund and Emergency Fund shared 5 percent, 1 percent and 1 per cent of contributions respectively.

Al Hammadi stated that in 2018, TBHF implemented an array of projects that were aimed at enabling communities to get back to normalcy by fulfilling their basic needs. One such example was development of the main building of the National Cancer Institute (NCI) in Cairo, Egypt, with the financial support from the MENA Fund.

Refugees Fund and IDP Fund developed the services of the Big Heart Clinic, which was established in 2015, to improve the general health status of 24,000 Syrian refugees in Zaatari Camp in Jordan. The fund was also used to build a hospital in Cox's Bazar district of Bangladesh for Rohingya refugees.

The Palestinian Children Fund responded to the challenges and hardships in the besieged Gaza Strip. Through a number of well-designed programmes, it enhanced the healthcare sector and supported United Nations Relief and Works Agency’s (UNRWA) efforts, aimed at delivering urgent medical assistance to Palestinian children.

The fund also established the first secondary school for children with hearing disabilities in Palestine, empowering and helping them to improve their academic performance and be capable of helping their families in the future. The ‘Big Heart’ school is situated in Qalqilya, Northern West Bank, in a strategic location that connects all Palestinian cities, offering access to 45,000 hearing-impaired students from all age groups an access to education.

The Zakat Fund established a ‘Community Centre’ in Aleppo, Syria, to support the efforts of the UNHCR, with an aim to provide community-based protection activities. It also provided the United Nation agency with financial support to rehabilitate three schools in the south of Syria. Targeting 3000 internally displaced students, the project is anticipated to conclude by mid-April 2019.

On the other hand, the Emergency Fund provided urgent assistance to the poorest and most vulnerable communities in South Sudan, in collaboration with the United Nations Development Group’s World Food Programme (WFP).

Al Hammadi highlighted that TBHF’s humanitarian work is part of the global efforts aimed at combating poverty and its negative social and cultural consequences, in addition to achieving sustainable development goals (SDGs) of United Nations. She said that TBHF’s work is aligned to the vision of His Highness Sheikh Dr. Sultan bin Muhammad Al Qasimi, Member of the Supreme Council and Ruler of Sharjah, as well as Sharjah’s and UAE’s approach that seeks to help nations in need, worldwide.

TBHF firmly believes that the global collaboration aimed at facing conflicts, natural disasters, and stalled development challenges, can create a better, more secure, and stable future. Such efforts can also eliminate the feeling of being excluded and marginalised, which can result from leaving poor and less fortunate people to face the challenges on their own.

The TBHF is a humanitarian charity, that was established in 2015 after a range of humanitarian initiatives and campaigns launched by Sheikha Jawaher Al Qasimi. TBHF aims to provide protection for children in need and their families. Although the foundation concentrates its efforts in the Arab world, it provides support to affected areas worldwide.