The scent of soap making returns to Aleppo - GulfToday

The scent of soap making returns to Aleppo 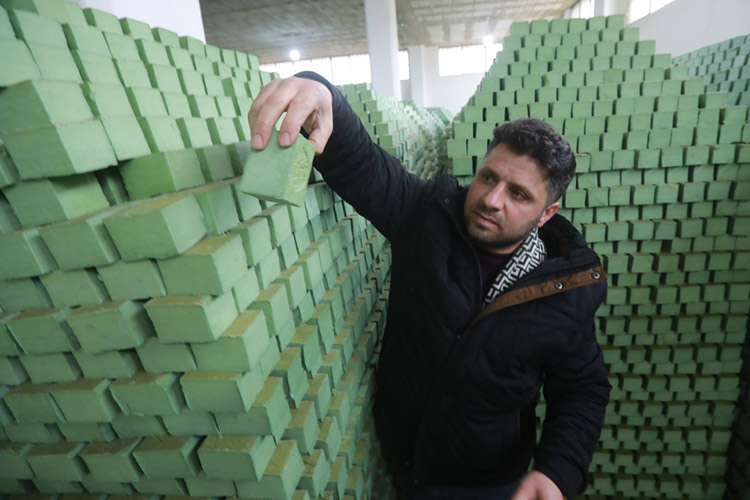 Aleppo: After years of war, the scent of laurel oil once again wafts from a small soap workshop in Aleppo, signalling the revival of a landmark trade in the battered northern city.

Surrounding soap workshops in the Al Nayrab district still lie in ruins, badly damaged in the four-year battle for the former rebel stronghold.

But for Ali Shami, hanging up his apron was not an option.

"I never stopped making soap throughout the war — even if it was just a little," says the 44-year-old, who fled his home city during the fighting. "But this workshop is special," he tells AFP.

"It was here that I started more than 30 years ago." Shami reopened his soap workshop last month after shutting it down in 2012, when Syria's second city became a main front in the eight-year-long conflict.

The scars of war are still visible on the building, its walls punctured with holes caused by shelling. Rushes of wind gust through the gaps.

Shami carried out limited renovations — just enough to produce more than half of his pre-war output of around 800 tonnes a year.

He installed a new metal door and refurbished the main rooms where the soap mixture is heated and then poured out to dry.

He watches as five workers stir a thick mixture of olive and laurel oil in a large vat.

Beside them, another five workers slice cooled and hardened green paste into cubes and stack them in staggered racks.

Shami says he was able to resume operations quickly because Aleppo soap is handmade.

Its production "relies on manual labour, a successful mixture, the passion of Aleppo's residents, and their love of the profession", he says.

Home is where the soap is

After closing down in 2012, Shami tried to continue his work in other major Syrian cities.

"My existence is tied to the existence" of soap, he says. He moved to the capital, Damascus, and the regime-held coastal city of Tartous, but Shami says the soap was not as good.

"Aleppo's climate is very suitable for soap production and the people of Aleppo know the secret of the trade and how to endure the hardship of the many stages of its production," he says.

Shami, who inherited the soap business from his father and grandfather, boasts about the superior qualities of Aleppo soap, the oldest of its kind in the world.

"Aleppo soap distinguishes itself from other soaps around the world as it is made almost entirely of olive oil," he says.

"European soap, on the other hand, includes animal fats, while soaps made in Asia are mixed with vegetal oils but not olive oil," he says.

The Aleppo region is well-known for its olive oil and sweet bay oil, or laurel.

Shami says the Aleppo soap industry was hit hard by the fierce clashes that rocked his home city, before ending in late 2016 when the army took back rebel districts with Russian military support.

While conditions are less dangerous today, soap producers still grapple with shortages of raw material and skilled labour, he says.

"We are struggling with the aftermath of the battles," he says.

Dozens of soap producers are still waiting to complete renovations before reopening their workshops.

Hisham Gebeily is one of them.

His soap making centre in the Old City of Aleppo, named after the family, has survived for generations, dating back to the 18th century.

The three-storey stone workshop covers a space of around 9,000 square metres (97,000 square feet), and is considered among the largest in the city.

The structure still stands, although damaged by the fighting: parts of it have been charred by shelling and wooden beams supporting the roof are starting to fall apart.

"Before the conflict, the city of Aleppo housed around 100 soap factories," he says. But only around 12 are still operating today.

The soapmaker says that many of Aleppo's soap producers have moved to Damascus and Tartous, while others have crossed the border to Turkey.

Gebeily, who heads a committee of Aleppo soap producers, says the province used to produce around 30,000 tonnes of soap per year before the conflict.

"The smell of laurel oil would waft out of this workshop and others like it into Aleppo," he said.

"No one would visit the city without buying its soap."

Today, figures are back up to 10,000 tonnes a year, he says, as factories once again churn out a Syrian "national treasure."