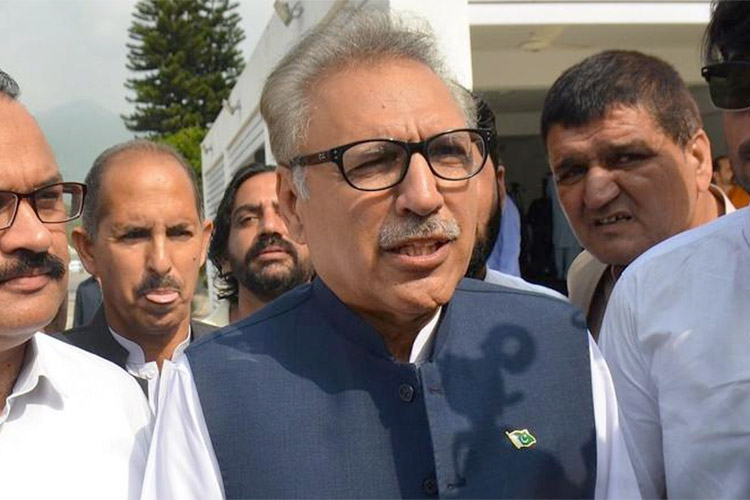 In his message on the occasion of Pakistan Day, President Arif Alvi said March 23 marks the historic day when the Muslims of sub-continent decided to unite in their democratic demand for a separate homeland. Agence France-Presse

ABU DHABI: In his message on the occasion of Pakistan Day, President Arif Alvi said March 23 marks the historic day when the Muslims of sub-continent decided to unite in their democratic demand for a separate homeland, where they could establish and practice their lives in accordance with their values and traditions especially justice, equality, and freedom.

“Today is an occasion to pay tribute to the struggle and sacrifices of our founding fathers and pledge once more to live up to the ideals that form the foundation of the Pakistan. Pakistan has surmounted unprecedented challenges and demonstrated resilience in the face of extra-ordinary circumstances. It has accomplished exemplary successes in fight against terrorism and extremism. However, there still remains the challenge of socio-economic development. We need to work even more for national progress and prosperity.

“We are committed to democracy, justice, and peace. Given our human talent and natural resources, our potential is immense. We are destined to achieve the status of a model democratic state, as envisioned by Quaid-e-Azam Mohammad Ali Jinnah. Let us have faith and remain united and let us commit to work hard with discipline to make Pakistan strong and prosperous. May Allah’s blessings be with us all.”

Prime minister Imran Khan said: “March 23 is a historic day in our national history when the Muslims of sub-continent determined their destiny in line with the vision of Allama Mohammad Iqbal. That very day, the Muslims of Sub-Continent, under the leadership of Mohammad Ali Jinnah, resolved to carve out an independent Muslim state for themselves thus breaking the shackles of slavery.

Meanwhile, Pakistan’s Ambassador to the UAE Moazzam Ahmad Khan and Consul General Ahmed Amjad Ali congratulated the expats on Pakistan Day and hailed the UAE’s leadership for their support to Pakistan.

In his message Khan said: “On the occasion of Pakistan Day, I wish to convey to my fellow countrymen living in the UAE my heartfelt congratulations. Each year we mark March 23 as the commencement of our journey towards freedom and cherish the ideals of our nationhood.

“The demand for Pakistan was not for the attainment of territory or a piece of land. At its core, it was about certain deeply held ideals of social justice, equality, self-determination and most importantly religious freedom. These ideals continue to animate our dreams and actions till this day.

“Let us not forget our debt of gratitude to the UAE, its people and leadership, who have stood in solidarity with Pakistan through good times and bad. With the UAE, we have long standing and deep-rooted religious, cultural, civilisational and economic links. It is heartening to see that the momentum initiated by late Sheikh Zayed Bin Sultan Al Nahyan has been sustained under the current leadership of His Highness Sheikh Khalifa Bin Zayed Al Nahyan, President of the UAE, His Highness Sheikh Mohammed Bin Rashid Al Maktoum, Prime Minister of the UAE and Vice President and Ruler of Dubai and His Highness Sheikh Mohamed Bin Zayed Al Nahyan, Crown Prince of Abu Dhabi and Deputy Supreme Commander of the UAE Armed Forces.

“Pakistan was honoured to receive Sheikh Mohamed Bin Zayed in Islamabad in January this year. This was the third high level interaction between the leadership of Pakistan and the UAE in as many months.

Consequent to these high level interactions followed by several visits at the ministerial level, the two sides have decided to transform these special relations into strategic partnership, encompassing all areas of mutual interests. Here, I would particularly like to thank the UAE leadership for its generous financial support to Pakistan. It will go a long way in helping Pakistan address its external financial challenges. We are confident that this mutually beneficial relationship will further expand and diversify in the years ahead.”

Ali, Consul General of Pakistan, said: “Today we celebrate 79th Pakistan National Day. This day is a manifestation of the resolve of the Muslims of South Asia and their resolute in the creation of Pakistan under the dynamic leadership of Muhammad Ali Jinnah.

“On this auspicious occasion, I wish to felicitate all Pakistanis living in the UAE a very happy National Day.”