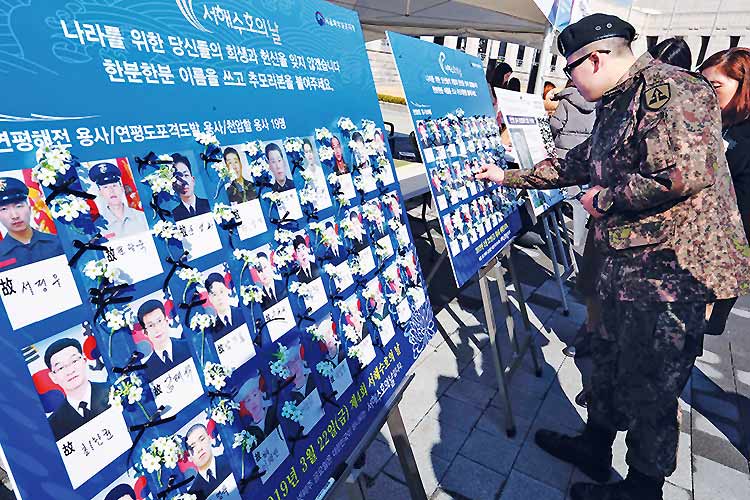 A soldier places a flower at portraits of deceased South Korean troops during a ceremony in Seoul on Friday. Associated Press

SEOUL: North Korea on Friday pulled out of a liaison office with the South, in a major setback for Seoul, just hours after the United States imposed the first new sanctions on the North since the second US-North Korea summit broke down last month.

North Korea said it was quitting the joint liaison office set up in September in the border city of Kaesong after a historic summit between leader Kim Jong Un and South Korea’s President Moon Jae-in early last year.

“The North’s side pulled out after conveying to us that they are doing so on the instructions from a higher level, during a liaison officials’ contact this morning,” South Korea’s Vice Unification Minister Chun Hae-sung told a briefing.

South Korea regrets the decision and urged a swift normalisation of the arrangement, Chun said, adding the South would continue to staff the office, set up as a regular channel of communication to ease hostility between the rivals, which technically remain at war.

Chun said he would not directly link the North’s move to the failed Hanoi summit.

But experts saw a pattern in the North lashing out against the South when its crucial strategic position with Washington is in jeopardy.

“The North sees its nuclear issue and ties with the United States as a matter of greater strategic importance, so when they try to assert its position, they sacrifice the ties with the South, which is considered inferior,” said Shin Beom-chul of the Asan Institute for Policy Studies in Seoul.

Moon’s office reacted by holding an urgent meeting, headed by his national security adviser, to discuss the withdrawal.

The won weakened about 0.4 per cent against the dollar in non-deliverable forward (NDF) trade after the news.

It also cited 67 vessels for engaging in illicit transfers of refined petroleum with North Korean tankers or facilitating the export of the North’s coal. Reuters was unable to locate contact details for either of the Chinese companies to seek comment.

The US sanctions prohibit U.S. dealings with the designated companies and freezes any assets they have in the United States.

“The United States and our like-minded partners remain committed to achieving the final, fully verified denuclearisation of North Korea and believe that the full implementation of North Korea-related UN Security Council resolutions is crucial to a successful outcome,” Treasury Secretary Steven Mnuchin said in a statement.

The latest sanctions showed there was some “leakage” in North Korea sanctions enforcement by China, but it was mostly abiding by UN resolutions, a senior US official told reporters on condition of anonymity.

While declining to say whether Washington was trying to send a post-summit message to Pyongyang, the official said Trump “has made clear that the door is wide open to continuing the dialogue with North Korea.”

It was the first such step since a second meeting between President Donald Trump and North Korean leader Kim Jong Un in Hanoi broke down over conflicting demands by the North for relief from sanctions and from the United States for Pyongyang to give up its nuclear weapons.

The North’s withdrawal from the office was another blow to Moon, who has seen his standing as a mediator between Pyongyang and Washington deteriorate and divisions grow within his government over how to break the impasse.

Moon’s administration had touted the office as a major feat resulting from his own summit with Kim last year despite U.S. concerns about possible loosening of sanctions.

US-North Korean engagement has appeared to be in limbo since the Feb. 27-28 summit, despite U.S. Secretary of State Mike Pompeo saying on March 4 he was hopeful he could send a team to North Korea “in the next couple of weeks.”

North Korea has warned it is considering suspending talks and may rethink a freeze on missile and nuclear tests, in place since 2017, unless Washington makes concessions.