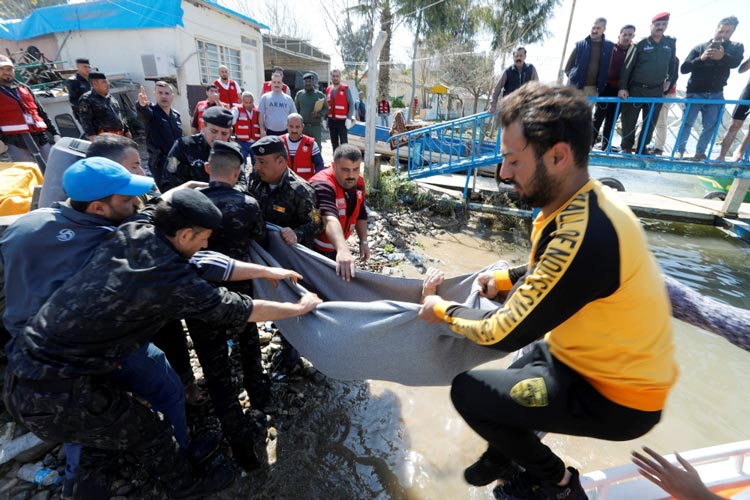 Iraqi rescue team members carry a body out of the water, where an overloaded ferry sank in the Tigris River near Mosul on Friday. Khalid Al Mousily / Reuters

MOSUL: The capsizing of a Tigris River ferry packed with families celebrating Kurdish New Year in Mosul left at least 100 people dead, mostly women and children, the Iraqi interior ministry said on Friday, as grief and anger swept the city.

The capsize of the boat, which was carrying families to a recreational spot on an island in the Tigris River, was the single most deadly incident in Mosul since the city was recaptured from Daesh in a bloody and destructive conflict in 2017.

But the celebrations turned to tragedy when the overcrowded vessel ran into trouble as it headed to a popular picnic site across the Tigris River.

Mosul security officials blamed the accident on high water levels and overcrowding on the boat.

Hundreds of relatives of victims and residents gathered on Friday at the scene of the accident, where prayers were held for the dead.

Many said the disaster could have been avoided, and chanted "corruption is killing us!"

"We want those responsible to be brought to justice," said Mohammed Adel, 27, whose father was among those who died.

He accused officials of failing to enforce safety standards.

Abu Salem, who lost his wife and two children in the accident which also coincided with mother's day in Iraq, pinned blame for the tragedy on profit motives and the corruption that is endemic in Iraq.

The managers of the picnic site were "criminals... I want them to pay up and I won't leave here until they do", the 50-year Iraqi said.

"Corruption and mismanagement are the reason for what happened. These were families trying to have fun, and they ended up bodies in the river," said Mohammed Thannon, a student who was among the protesters.

"We reject visits by officials. They're weak and corrupted and have failed to improve Mosul since the nightmare of Daesh," he said.

Younes Abdullah, a 35-year-old civil servant, said: "We need action not words. Those who caused the tragedy must be brought before justice and executed."

Medical sources raised the death toll from Thursday's capsize to at least 90 people as rescue teams continued to search for the drowned and missing.

Reflecting the popular mood, Grand Ayatollah Ali Sistani, spiritual leader of Iraq's Shiite Muslim majority, in his Friday sermon accused "the authorities in charge of supervision of not doing their job."

Transparency International ranks Iraq in 12th place in its list of the world's most corrupt countries.

Video footage from cameras at the picnic site, posted online, showed a severely overcrowded vessel beginning to list as water comes aboard.

As it capsizes completely, it traps dozens of people under its hull.

Authorities had warned people to be cautious after several days of heavy rains led to water being released through the Mosul dam, causing the river to rise.

Videos showed a fast-flowing, bloated river and dozens of people floating in the water or trying to swim around the partly submerged boat.

Abdel Mahdi said the justice system "must do its job and the investigation must produce results on the reasons for this shipwreck."

Prime Minister Mahdi and President Barham Saleh visited the site of the accident as the search continued for bodies, some of which were carried far downstream by the strong current.

While war and militant attacks have claimed hundreds of thousands of lives in Iraq in recent years, such accidents are relatively rare.

But corruption and the dismal state of public services in Iraq were triggers for widespread protests last year.

Daesh turned Mosul into its de facto capital after sweeping across much of the country's north in 2014.

The city spent three years under the group's iron-fisted rule until it was recaptured by Iraqi troops backed by a US-led coalition in 2017.

Survivors of Thursday's disaster were treated in hospitals heavily damaged by the months-long military campaign against the militants.

A mortuary was receiving bodies wrapped in white shrouds, many bearing the names of women.

A forensics official said many had yet to be identified.

Iraq's justice ministry said it had ordered the arrest of nine ferry company officials and banned the owners of the vessel and the picnic site from leaving the country.
Officials implicated in various scandals have fled Iraq in recent years.