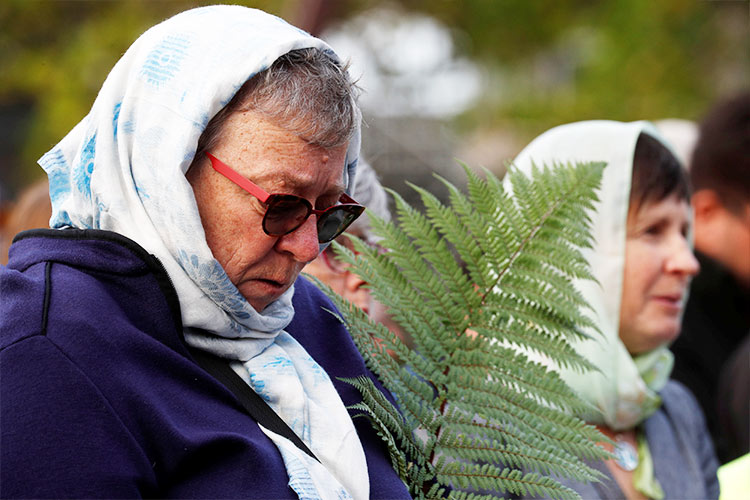 A woman holds a fern during a vigil for the victims of the mosque attacks during an ecumenical celebration in Christchurch, New Zealand.

CHRISTCHURCH: More than 10,000 people marched silently on Thursday through the New Zealand city where the alleged shooter in last week's massacre had lived, as the country paid its respects to the 50 victims of the tragedy.

Marchers made their way through Dunedin to a rugby stadium where a total of about 15,000 people eventually gathered for a sombre vigil, New Zealand media reported.

The accused killer, Australian-born 28-year-old Brenton Tarrant, had lived for the past two years in the city on New Zealand's South Island before carrying out last Friday's slaughter in Christchurch, about 350 kilometres (220 miles) to the north.

Students react while waiting for the body of victims.

A man stands in silence during the vigil.

A lady holds a fern during a vigil for the victims.

People gather for a vigil for the victims of the mosque attack.

People carry ferns during the vigil.

The Otago Daily Times said the march began at the University of Otago, about 20 minutes walk away from Forsyth Barr Stadium.

The marchers were joined by thousands more who had made their way there for ceremonies that included Maori incantations and Muslim prayers.

Dunedin Mayor Dave Cull called on New Zealanders to come together in support of those left bereft by the tragedy.

"We need to examine what needs to change so that this does not happen again," he said, according to the newspaper.

"To my Muslim brothers and sisters... you are a precious part of us and we embrace you.

Prime Minister Jacinda Ardern on Thursday announced an immediate ban on the military-style semi-automatic weapons used in the slayings.

Also on Thursday, hundreds of mourners turned out in Christchurch for a second straight day for the funerals of those killed.

Ardern has said a national remembrance ceremony would be held soon but a date has not yet been given.