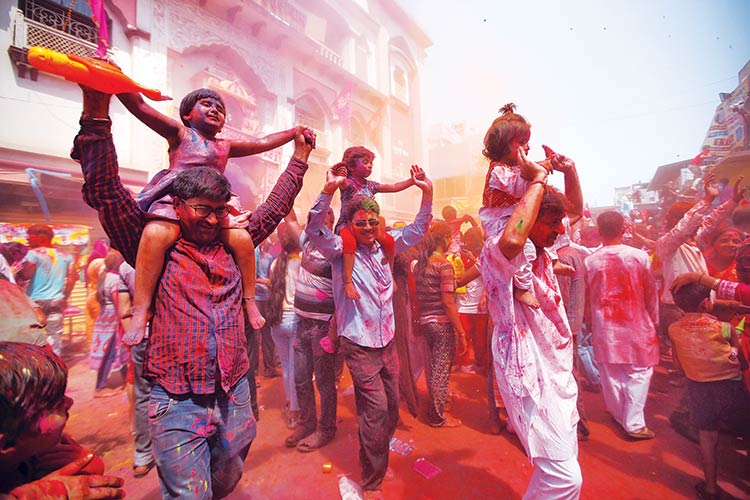 People daubed in colours dance during celebrations for Holi in Kolkata on Thursday. Reuters

“Greetings and best wishes to fellow citizens in India and abroad on the auspicious occasion of Holi,” tweeted Kovind, who had also released a statement on Wednesday.

“The festival of colours, Holi is a celebration of spring and fraternity in our society. May it bring peace, joy and prosperity to everyone’s lives,” Kovind said.

Naidu tweeted that Holi was a celebration of the victory of good over evil and a festival that expresses joy, camaraderie and conviviality.

Modi also extended greetings to the nation on the occasion of Holi and said that the festival of joy and gaiety would strengthen the colour of unity and goodwill.

Extending wishes, Rahul Gandhi said: “Wishing you and your family a very Happy Holi. I pray to God that this festival brings colours to your life.”

The four-day traditional Holi folk festival of Sujanpur in Himachal Pradesh, which traces its origin to the erstwhile Katoch ruler Sansar Chand, concluded amidst fanfare on Thursday, the organisers said.

However, politicians were conspicuously absent this time owing to the Model Code of Conduct that is in force for the Lok Sabha polls.

This time the Holi festivities began a day later on March 19 following the demise of Goa Chief Minister Manohar Parrikar on March 17.

The Sujanpur Holi in Hamirpur district, which dates back to 1795, is a festival with a difference. It comprises folk programmes that end on the day when the festival of colours is celebrated in most parts of the country.

Besides its historic and religious significance, the festival is also linked to the well-being and prosperity of the locals. It promotes tourism and trade as well.

It is believed that on Holi, the Katoch ruler put aside his royalty and mingled with the masses. A tank in the royal palace was filled with coloured water and Sansar Chand would kick start the celebrations by splashing it on his queens and relatives.

The royal family then set out of the palace on elephants and passed through the streets of the town with people standing along the way throwing colours on them.

Bollywood actors including Madhuri Dixit Nene, Akshay Kumar, Hema Malini and Hrithik Roshan on Thursday sent out Holi wishes to their fans, urging them to enjoy a safe and happy festival of colours.

Here’s what they had to say: Akshay Kumar: May this Holi add more colours to your life. Wishing you all a very Happy Holi and Navroz Mubarak as well.

Hrithik Roshan: May the spirit and colours of Holi fill you with happiness, peace and love. Happy Holi beautiful people.

Madhuri Dixit Nene: This Holi let us strive to paint a colourful world for everyone! Stay safe, enjoy responsibly! Hema Malini: Happy Holi to all of you! Emraan Hashmi: Wishing a very happy and colourful Holi to everyone!! And Navroz Mubarak to all my Parsi friends.

Madhur Bhandarkar: May God paint the canvas of our life with the colours of happiness, prosperity and peace. Wishing you all Happy Holi.

Amit Sadh: Happy Holi to everyone. Let these smiles and colours never fade away from our lives. Esha Deol: Happy Holi Arbaaz Khan: Happy Holi to all. Enjoy this colourful festival, spread love, happiness and unity.

For actors like Tejasswi Prakash and Adnan Khan, Holi is more than just a festival of colours and sweets. It is the time to renew relationships, do away with negativity and express love to dear ones.

“Holi is the time to break the ice and renew relationships,” Tejasswi said in a statement about Holi, being celebrated on Thursday.

Actor Adnan Khan considers Holi to be a festival “to burn all negativity and bring positivity in life”.

He has also advised women to “keep an eye for those who want to cause trouble. To be fair to those around, be with the friends you believe”.