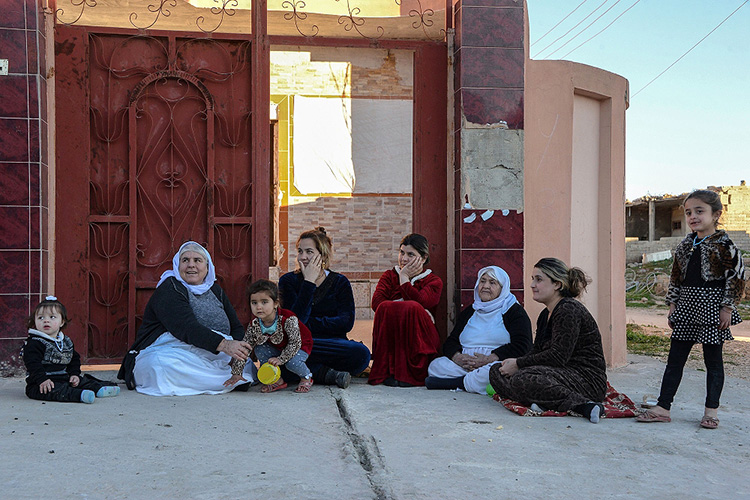 Members of a Yazidi family gather and sit outside the gate of their house in the northern Iraqi town of Sinjar. File / Zaid Al Obeidi / AFP

SINJAR (Iraq): For decades, his land was his life. Now, like other Sunni Arab farmers in Iraq's diverse north, Mahdi Abu Enad is cut off from his fields, fearing reprisal attacks.

He hails from the mountainous region of Sinjar, which borders Syria and is home to an array of communities —Shiite and Sunni Arabs, Kurds, and Yazidis.

That patchwork was ripped apart when Daesh group rampaged across the area in 2014, and has not reconciled even long after Iraqi forces ousted Daesh in 2017.

Yazidis, whose men Daesh killed en masse and whose women and girls were enslaved by the group, say they have suffered the most.

They accuse their Sunni Arab neighbours of granting the fighters of Daesh a foothold in Sinjar.

Displaced Sunni Arabs, on the other hand, slam the sweeping accusation as unfair and say looting and the threat of retaliatory violence have kept them from coming home.

"We stand accused of belonging to Daesh because they settled in Sunni areas, but Daesh doesn't represent Sunnis," said Abu Enad, displaced from his hometown to Al Baaj since 2014.

"We all lost our livelihoods. It's been four years since we cultivated our land because we fear for our lives," he said.

Fearing similar abuses, Abu Enad still lives about 10 kilometres from his farm, and was only able to tend to it during planting season with a paramilitary escort.

"We had to leave at 4:00pm every day because the situation was not safe enough. So how could you come back with your family to resume farming and living here?" he said.

'They betrayed the co-existence'

Across Iraq, around a third of the population relies on farming to survive, and the ratio was even higher in Sinjar.

For centuries, the region's diverse farmers jointly sold their fig and wheat harvests in the provincial capital of Mosul, 120 kilometres to the east.

But in the wake of Daesh, farming equipment was stolen, orchards burned, and rubble stuffed into irrigation wells.

Now, the area's once-lush farming hamlets have been reduced to ruined ghost towns, with most Arab villages including Abu Enad's left flattened.

A few kilometres to the north, the main town of Sinjar is also still rubble, with little power, water, or health services available.

A few thousand Yazidi families have come back, but tens of thousands more are still stuck in displacement camps elsewhere in Iraq and Syria, while others fled to Europe.

And more than 3,000 Yazidis remain missing, many of them believed to be women and girls taken as sex slaves.

That has made it difficult for the community to forgive or forget the mass crimes against them.

"The Arabs of Sinjar were involved in the abduction of our women," said Yazidi cleric Sheikh Fakher Khalaf.

"They betrayed the co-existence we had, so they can no longer live among us," said Khalaf, who returned home to Sinjar after three years of displacement.

"Those who have done nothing, we respect them. But those who have blood on their hands, they must face justice. Sinjar is not a place for them."

'Fruits of our labour'

Several local initiatives have made minimal progress on reconciliation, but efforts have not gone far enough, said the Norwegian Refugee Council.

"We are seeing plans to rebuild and rehabilitate some parts, but we're not seeing any concrete process towards reconciliations," spokesman Tom Peyre-Costa told AFP.

He called for more dialogue between communities, transparent and fair trials, and accountability for all perpetrators of crimes.

Iraqi courts have tried hundreds for belonging to Daesh, handing down at least 300 death sentences.

"People who used to be able to live together are not able to do so anymore because of the tension between communities, so this is why reconciliation must be prioritised," he said.

While the communal fissures in Sinjar are particularly deep, the challenge of rebuilding trust after Daesh is one faced across Iraqi society.

Sunnis are a minority in Iraq, whose population is about 60 per cent Shiite.

Displaced Sunnis with perceived ties to Daesh undergo tough screening processes to return to their hometowns, where they sometimes face harassment.

Abu Enad, the displaced farmer, still hopes that Sinjar can return to its harmonious past.

"We Sunnis have been hurt by Daesh like Yazidis were hurt," he told AFP.

"We want to come back to our land so we can farm and live off the fruits of our labour alongside them."