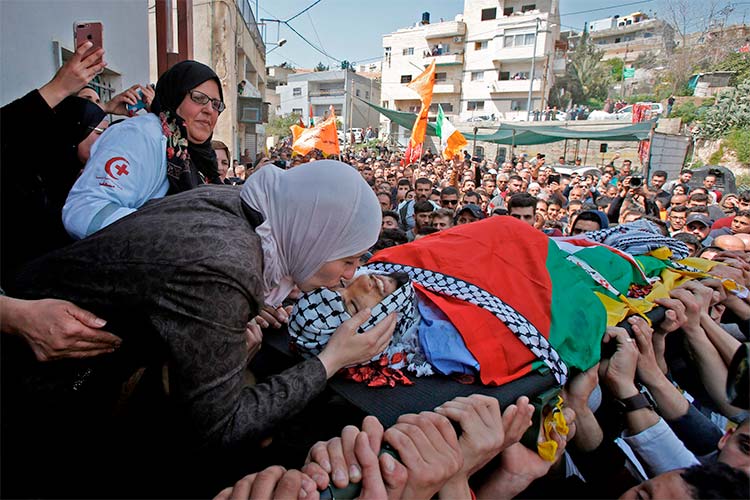 The mother of 26-year-old Ahmed Manasara kisses her son’s body during his funeral in the village of Wadi Fukin, west of Bethlehem, on Thursday. Agence France-Presse

“This is a summary execution and Israel bears the full responsibility for this crime,” Hmeid said.

The Palestinian Red Crescent said one of its crews treated a man with two bullet wounds at an Israeli military roadblock near the city of Bethlehem on Wednesday and that Israeli forces had shot him.

It gave no details about the circumstances of the night-time shooting. The Palestinian Health Ministry identified the man as a 26-year-old from Bethlehem and said another Palestinian had also been shot and critically wounded.

Hours later, the Israeli military said a soldier stationed at a military post near Bethlehem identified rocks being thrown at Israeli vehicles and in response fired his weapon. The military said it was investigating the incident, which comes amid heightened tensions in the West Bank.

The military did not identify the soldier’s intended target and some Israeli media reports said warning shots were fired in the air, suggesting the two Palestinians may have been hit unintentionally.

“A report was received regarding injured Palestinians,” the military said. “Details regarding the incident are being reviewed and the incident will be examined.” Wabeb Manasrah, a cousin of the slain Palestinian, confirmed the governor’s account. He said they were trying to help the wounded man and that his cousin was going to drive his wife and children away when he was gunned down.

“There were no clashes, no stone throwing, nothing at all,” he said. “I don’t know why they shot him.” On Wednesday, the Israeli military said it shot and killed two Palestinians who had attacked troops in the West Bank city of Nablus.

The uptick in West Bank violence comes as Israel is currently in the midst of an election campaign and Egypt is trying to broker a long-term truce between Israel and Gaza’s Hamas rulers.