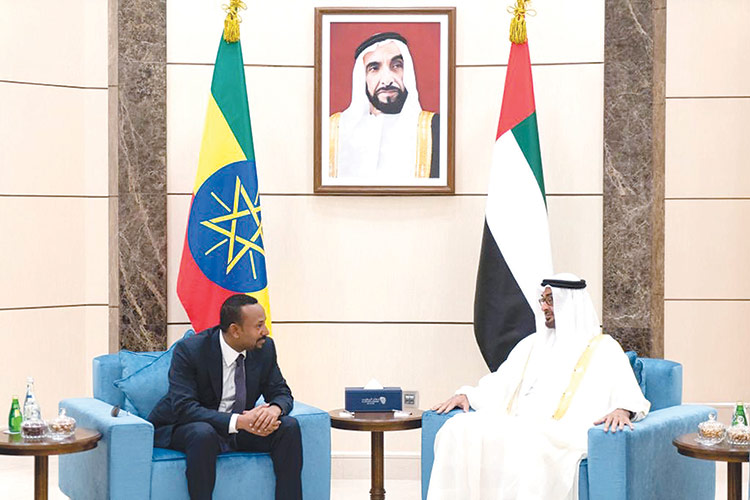 The two leaders exchanged views on regional and international developments, and a number of issues of mutual concern.

During the meeting held in Abu Dhabi, Sheikh Mohamed and Prime Minister Abiy reviewed the friendly ties between the UAE and Ethiopia, and opportunities to further enhance said relations across multiple sectors, particularly in development, trade and investment, to serve the common interests of both countries.

The two sides also exchanged views on regional and international developments, as well as a number of issues of mutual concern.

Sheikh Mohamed emphasised the UAE’s stance, under the leadership of President His Highness Sheikh Khalifa Bin Zayed Al Nahyan, to diversify relations with all friendly countries based on principles of trust, mutual respect and cooperation, to ensuring security, stability and peace for all people across the globe.

Sheikh Mohamed also noted the importance behind enhancing cooperation and joint action between the UAE and Ethiopia, opening up new opportunities to serve the interests of both countries and peoples, and achieve their development aspirations.

For his part, the Ethiopian Prime Minister expressed his happiness at visiting the UAE, the land of tolerance and peace, praising the country’s global humanitarian efforts to promote the values of tolerance, co-existence and cooperation among different nations, peoples and cultures worldwide.

Mr. Abiy stressed his country’s interest in strengthening and diversifying its relations with the UAE, across the trade and investment sectors, among other areas of cooperation to achieve the development aspirations of the two countries.

Sheikh Mohamed and President George Weah of Liberia, discussed ways of consolidating bi`lateral ties of friendship and prospects and potentials for joint cooperation across investment, economic, developmental and tourist fields.

While welcoming the visiting Liberian president, Sheikh Mohamed expressed his hope that the visit would contribute towards further enhancement of relations between the UAE and Liberia and open up new avenues for bilateral cooperation that serve mutual interests.

During the meeting, the two sides exchanged views on a variety of issues and matters of common concern.

His Highness emphasised the UAE’s interest, under the leadership of President His Highness Sheikh Khalifa Bin Zayed Al Nahyan, to build constructive relations with friendly countries that drive cooperation in vital and developmental domains for the best interest of countries and their peoples as well as their aspirations for development, progress and prosperity.

He stressed that the UAE establishes its relations with other countries based on its conviction of people-to-people cooperation and interaction so as to serve regional and international security, peace and stability and bring about welfare to all peoples.

For his part, President Weah lauded the efforts made by the UAE towards sustainable development, guided by the wise vision, political and economic stability, and harmony and cohesion between the leadership and people, which characterise the UAE, a land of tolerance ad coexistence.