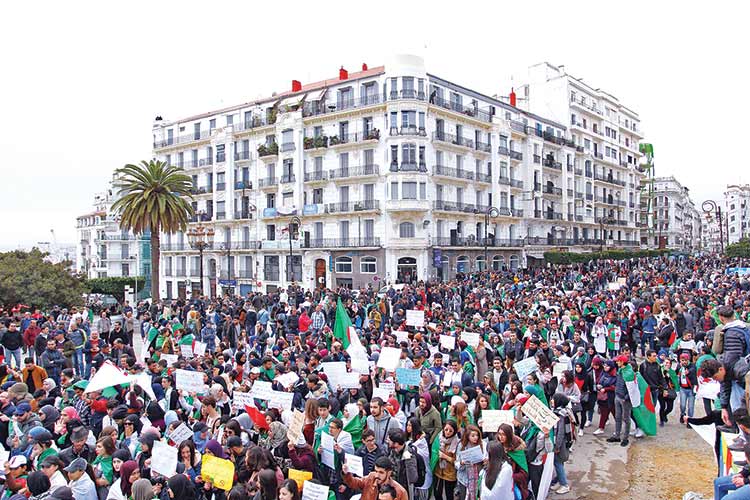 Algerians carry placards and national flags as they take part in a demonstration in the capital Algiers against Abdelaziz Bouteflika. Agence France-Presse

ALGIERS: The party of ailing Algerian President Abdelaziz Bouteflika said on Wednesday it supports protesters’ calls for change while advocating his initiative for dialogue to overcome the country’s political crisis.

National Liberation Front (FLN) chief Mouad Bouchareb said the government “was not in the hands of the party”, in remarks seen as an attempt to distance the FLN from the Bouteflika regime.

The FLN has been in power since Algeria won independence in 1962.

Algeria has been gripped by unprecedented protests since February 22, following Bouteflika’s announcement he was running for a fifth term as president despite concerns about his ability to run the country.

The 82-year-old president uses a wheelchair and has rarely appeared in public since suffering a stroke in 2013.

Bouteflika, who is honorary leader of the party, had “made it clear he was moving towards changing the system, towards a new Algeria”, Bouchareb said.

“The people spoke unequivocally and FLN activists... will work to achieve the expected goals following a clear plan,” he said. “It is necessary to sit around a table for dialogue to attain a new Algeria.”

The FLN and its allies have for months supported Bouteflika’s bid for a fifth term, with the party appointing him as its candidate for elections that had been scheduled for April 18.

Bouteflika, who has been in power for two decades, on February 10 said he intended to stand in the election, triggering weeks of protests against the move.

In a surprise announcement on March 11, he said he was pulling out of the race, in a move initially greeted with elation by the protesters before they realised he still intended to remain in office.

The veteran leader announced he was rolling out reforms through a “national conference”, and confirmed on Monday that his plan would see him stay in power after his term ends on April 28.

Rarely seen in public since a 2013 stroke, Bouteflika issued a fresh statement on Monday which confirmed his new plan would see him stay in power after his term ends on April 28.

“(I hope) that Algeria experiences, in the near future, a harmonious transition and assists handing over the reins to a new generation,” he said in the statement.

“This is the ultimate goal that I have committed to making a reality before the end of my presidential journey, at your side and at your service,” added Bouteflika.

Algerian Deputy Prime Minister Ramtane Lamamra on Tuesday promised “open and transparent” steps to resolve the political crisis, during a visit to Russia.

He said Bouteflika was “ready to fully transfer his powers” to a new president.

Russian Foreign Minister Sergei Lavrov said Moscow, a longtime ally of Algiers, was behind the Algerian government’s efforts and hit out at “attempts to destabilise the situation from the outside”.

While Bouteflika has given no timetable for his national conference, he said the shake-up of Algeria’s “political, economic and social systems” would start “in the very near future”.

A constitutional review would be put before a referendum, he said, which would be “a prelude to a new electoral process that will see the election of a new president.”

Protests initially erupted last month after Bouteflika announced his intention to stand for a fifth term, bringing tens of thousands to the streets in the north African country.

Last week, for a fourth consecutive Friday, hundreds of thousands of demonstrators marched across the country stepping up demands for Bouteflika to go.

Despite the president’s reform pledges, Algerians have continued marching in huge numbers, many clutching humorous banners and waving their country’s flags amid a festival atmosphere.

“Make like the dinosaurs, and disappear!” read one banner on Tuesday, or “Geologists are hoping for the mass extinction of the government.”