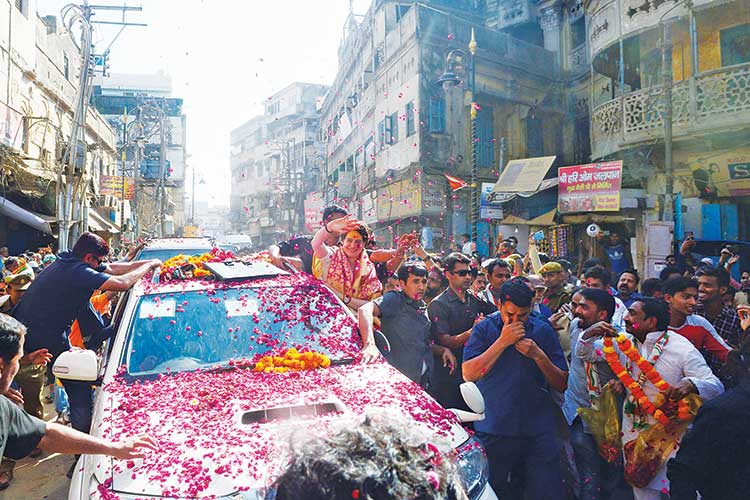 VARANASI: A minor scuffle broke out between Congress and BJP supporters while Priyanka Gandhi Vadra was visiting the Shastri Memorial at Shastri Chowk in Ramnagar here to pay tribute to former Prime Minister Lal Bahadur Shastri.

The scuffle on Wednesday broke out after local BJP leaders objected to Congress workers raising slogans like “gali gali me shor hai, chowkidaar chor hai”. The clothes of some BJP supporters were torn in the scuffle.

However, after Priyanka left the area, the BJP supporters gathered and started raised anti-Congress slogans.

Congress general secretary Priyanka Gandhi on Wednesday accused the BJP of systematically attacking every democratic institution in the country and said that Prime Minister Narendra Modi should not take people for fools.

Speaking to reporters before beginning the third day of her campaign along the river Ganga on Wednesday, she said, “BJP has systematically attacked every democratic institution in the country in the last five years. You all know it better than I do.

“So I think the Prime Minister should stop thinking that people are fools and understand that they see through all his antics.” On Wednesday, Priyanka, who is also Congress’ in-charge of Eastern Uttar Pradesh, is in Prime Minister Narendra Modi’s constituency, Varanasi.

Starting her day with an interaction with party workers at the Chunar Fort, she paid tributes to Lal Bahadur Shastri at the Shastri Chowk and Shastri Memorial, the house of the former Prime Minister in his ancestral village Ramnagar.

Sanjay Kumar said, “Her arrival augurs a change. People are looking for a new ideology. Now people want to get away from the politics of temple and mosque.” “We have felt helpless in the last five years, we feel cheated by the government,” he added. Shahnawaz, another local told IANS, “The BJP has not lived up to our expecations. We see a hope in Priyanka Gandhi and the Congress.” Priyanka took the boat ride from the Ramnagar Ghat to Assi Ghat, where she will interact with the locals — mainly fishermen, people of the Jain community and women.

Later in the day, the Congress leader will offer prayers at the Kashi Vishwanath Temple on the Dashashwamedh Ghat. This will be Priyanka’s fourth temple visit since March 18, when she kicked off her river ride from Prayagraj on Monday.

On Monday, she visited the famous Hanuman Mandir in Prayagraj, followed by trips to the Sita Samahit Sthal temple in Bhadohi’s Sitamarhi and the Vindhyavashini temple in Vindhyachal on the second day of her campaign. She also offered a chadar at Kantit Sharif dargah on Tuesday.

The Congress leader will also meet her party workers in Varanasi and visit the homes of three Central Reserve Force Police (CRPF) troopers who died in the Feb.14 terrorist attack in Jammu and Kashmir’s Pulwama. She will meet the family members of Avadhesh Yadav in Chandauli district. On her way back to Varanasi, she will meet the families of Vishal Pandey and Ramesh Yadav.

Priyanka Gandhi, whose visit to the Vindhyavasini Devi Temple near Mirzapur in Uttar Pradesh was marred by pro-Modi slogans raised by BJP supporters, believes in spiritual self-discovery and has practised meditation.

Gandhi, on a boat ride on the Ganga from Pryagraj to Varanasi, has been visiting well-known temples and has assailed the Modi government in her interactions with people. But she has largely steered away from politics in her tweets.

Gandhi had taken a Vipasana meditation course and has been practising meditation. She has also pursued a Masters degree in Buddhist studies.

“I was so troubled by the fact that I didn’t know my mind, so I just disappeared and went for 10 days of meditation,” she had said in an interview years ago. According to dhamma.org, ‘Vipassana’ means to see things as they really are and is one of India’s most ancient techniques of meditation. It was rediscovered by Buddha more than 2,500 years ago and was taught by him as a universal remedy for all ills.