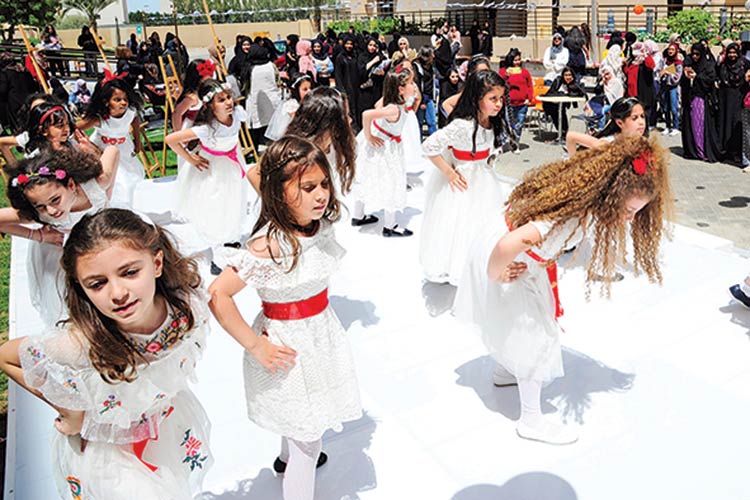 A vibrant atmosphere was created with colourful cultural performances by school students.

ABU DHABI: In celebration of Mother’s Day, Abu Dhabi University (ADU) students, in coordination with the Student Affairs Department, organised and hosted the University’s first ever festival in celebration of the Mother of the  Nation. A full day of festivities for students and their mothers included cultural performances, a photography exhibition, and a delightful recitation of Mother’s Day poems, along with traditional activities such as henna drawing.

The event took place outside the Umm Al Emarat building at the University’s main campus in Abu Dhabi. The family-friendly festival also featured a food corner, which offered a unique selection of food trucks and kiosks. Female students and their mothers were invited to put their culinary skills to the test during the cake decorating competition. The festival included a number of external vendors and pop-up stores by student-founded startups offering unique Mother’s Day gifts ranging from beauty and fashion products to coffee and cookies.

Students who helped adorn the celebrations brought in hand-crafted ornaments and gifts, and a selection of homemade foods, as a demonstration of love and appreciation to their mothers.

Iman Najm, Events and Activities Officer, commented, “On the special occasion of Mother’s Day, we extend our warmest wishes to the mothers of our students and mothers all around the world. Most importantly, we extend our wishes to H.H. Sheikha Fatima Bint Mubarak, the inspiration behind this event, who we honour on this day as the Mother of the Nation for her encouragement and dedication to the community and our young people.”

Dr Bianca Teats, Senior Manager in the Student Engagement Office, added, “We are very proud of our students for successfully organising this event and bringing a spirit of leadership and teamwork through their exemplary efforts. ADU strives to promote a student life that enables them to flourish academically and socially, whilst becoming part of a rich, vibrant and diverse community.”

A vibrant atmosphere was created with colourful cultural performances by school students from Al Manhal School. The General Women’s Union (GWU) took part in the event by offering  a selection of local vendors selling Emirati food, traditional crafts, and gifts.

Under the directives of Sheikh Hamdan bin Zayed Al Nahyan, Ruler’s Representative in Al Dhafra Region and President of Abu Dhabi University’s Board of Regents, the Umm Al Emarat  building was named after H.H. Sheikha Fatima bint Mubarak, Chairwoman of the General Women’s Union, President of the Supreme Council for Motherhood and Childhood, Supreme Chairwoman of the Family Development Foundation, and Mother of the Nation.

ADU currently has over 7,600 registered students across its four campuses in Abu Dhabi, Al Ain, Dubai and Al Dhafra Region. The students represent over 82 different nationalities and are enrolled in 44 undergraduate and postgraduate programs, all with global academic accreditation.

ADU currently has over 7,600 registered students across its four campuses in Abu Dhabi, Al Ain, Dubai and Al Dhafra Region. The students represent over 82 different nationalities and are enrolled in 44 undergraduate and postgraduate programmes, all with global academic accreditation.

Abu Dhabi University is a private, multi-campus university committed to meeting the education, skills and knowledge needs in the United Arab Emirates and neighbouring countries through qualifications and standards that are respected across the world.

Although young, the university is recognised as a world-class institution committed to excellence in teaching, student experience, research and corporate education. It is regularly featured in the Quacquarelli Symonds (QS) rankings as among the best higher education institutions in the region. It holds prestigious international accreditations for the institution as a whole, for particular fields of provision and for specific programmes.

It is the first private higher education institution in the UAE and the GCC region to earn international accreditation from the Californian Western Association of Schools and Colleges (WASC).