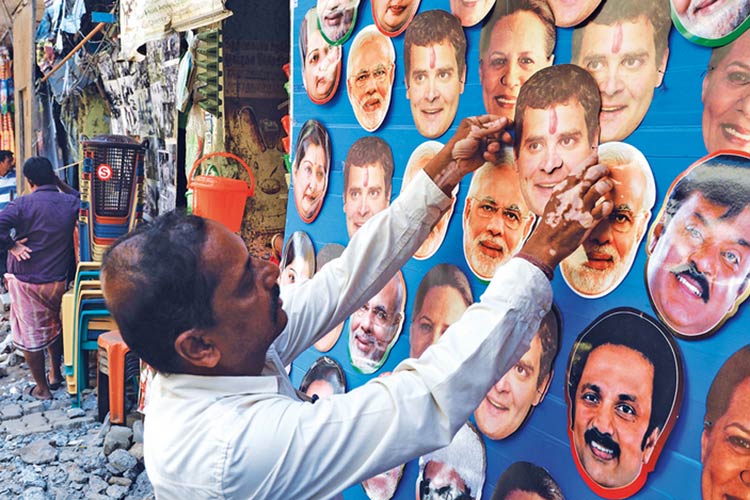 A shopkeeper displays masks of leaders for sale at a roadside shop in Chennai on Tuesday. Agence France-Presse

NEW DELHI: The local Congress chief, Sheila Dikshit, rushed into a huddle with three working presidents on Tuesday evening as the party decided to take a second look at an alliance with the Aam Admi Party (AAP), under proding from Nationalist Congress Party (NCP) chief Sharad Pawar.

But the AAP looked like shutting the door on the Congress. “There will be no alliance with the Congress in Delhi,” AAP leader Gopal Rai said on Tuesday.

“We kept on pleading (with the Congress)… they acted very arrogantly,” Rai said, underlining that if AAP waited any longer, it would be a huge setback for the anti-BJP campaign.

Rai said AAP couldn’t wait any more. “If we had continued to wait any further for the Congress, our campaign would have suffered a huge setback.”

Rai told media that the party waited for long before it decided to field its candidates, who have already started campaigning.

“We waited enough for the Congress but there was no formal communication from them. With the election so close, we cannot waste our time.

“We don’t want to spend even a single second thinking about the alliance now. We’ve announced our last candidate for Delhi and now there is no possibility that we will roll back any of our candidates. All our seven candidates will contest,” he said.

According to Rai, the Congress was not serious about Delhi and the contest in the state was between the Bharatiya Janata Party (BJP) and the AAP.

“If it (Congress) was interested, its leaders would have contacted us, but they are only speaking to the media. Apart from a meeting between (Congress Chief) Rahul Gandhi and (AAP Chief) Arvind Kejriwal, there has been no formal communication between the two parties,” he said.

Dikshit had earlier written to Congress president Rahul Gandhi, warning him against considering an alliance with the AAP.

However, the leaders who talked with her told reporters that they would abide by the decision of the High Command. Afterwards Dikshit also said she opposes an alliance, but will go by what the leadership wants.

They went over the seat sharing deal for Maharashtra where the Congress and NCP are in alliance. The conversation then moved to Delhi.

Pawar convinced Rahul that a Congress-AAP tie-up alone can ensure the defeat of the Bharatiya Janata Party (BJP) in Delhi’s seven Lok Sabha seats. Besides, a number of Congress ex-district presidents have written to Rahul Gandhi asking for an alliance with AAP.

Pawar had separate discussions with the Congress and AAP on Tuesday morning. He met Rahul Gandhi and Mallikarjun Kharge first, and then AAP’s Sanjay Singh.

A growing section within the Congress feels that the party may not be in great shape to take on the BJP on its own. “As far as I know there are senior leaders in Delhi who think that defeating BJP is party’s immediate responsibility; for it we should form an alliance with AAP, that’s the thinking of the majority of leaders,” PC Chacko said hours earlier.

His comment later was a clear warning to Dikshit. “Delhi leaders have to follow the Congress’s policy decision to go for alliances with parties opposed to the BJP.” That was clear enough. Delhi votes on May 12.

However, Delhi Chief Minister and AAP chief Arvind Kejriwal on Tuesday said the Congress has officially conveyed its “no” for an alliance in the city.

Interacting with the media after a public rally in East Delhi’s Laxmi Nagar, he said no talks are going on between the two parties.

“As far as I know, the Congress has officially conveyed to us that there will be no alliance. We don’t have to do anything with their meetings. We are not in talks with Congress.

“The stories in the media about the alliance are planted by the Congress. I have no clue about it,” he said. In his address at the rally, Kejriwal attached the Congress and the Bharatiya Janata Party for not working for the people and not letting the AAP work.