Parts of US Midwest deluged in historic deadly floods - GulfToday

Parts of US Midwest deluged in historic deadly floods 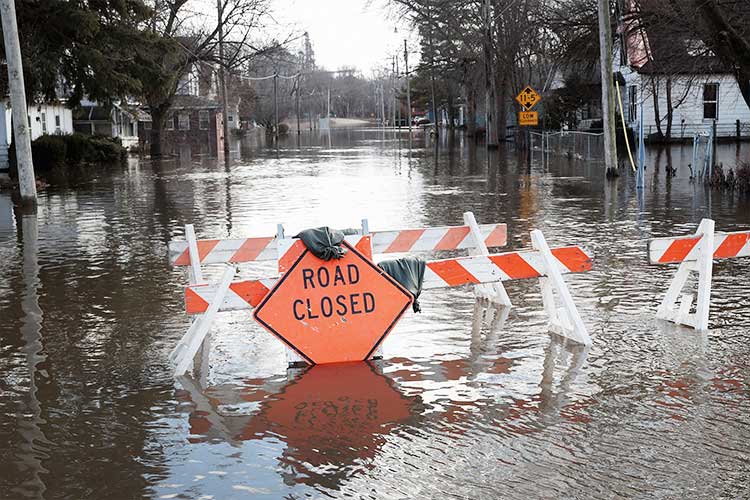 A road is covered with floodwater from the Pecatonica River in Freeport, Illinois.

CHICAGO: The US Midwest struggled Monday with historic flooding that claimed at least three lives, displaced residents and damaged hundreds of homes and businesses.

Swollen waters hit much of Nebraska, as well as parts of Iowa, Wisconsin, and South Dakota, after a major storm last week dumped snow and rain, even as melting snow was already raising the levels of area waterways.
Neighboring states could also be affected as floodwaters drain, officials said.

President Donald Trump on Monday described the floods as "devastating" and said the White House would remain in close contact with state officials.

"Our prayers are with the great people of South Dakota," he said in one tweet.

In another aimed at Iowa residents, he said: "We support you and thank all of the first responders working long hours to help the great people of Iowa!"

The National Weather Service (NWS) described the flooding as "major" and "historic," forecasting that it would continue across large sections of the middle of the country.


"Flood Warnings and Advisories are scattered throughout the Plains, Mississippi Valley, and western parts of the Ohio Valley region, with a focus in Nebraska and western Iowa,

"Farther west and north, areal flooding is also possible in the Northwest and Northern Plains as snowmelt continues over frozen ground."

The early damage assessment total for the state of Nebraska was more than $260 million, according to emergency management officials.
Record flooding was reported in 17 locations in the state and 10 American Red Cross shelters were operating for displaced residents.

At its highest point, the Missouri River was expected to crest at 47.5 feet (14.5 meters), beating its 2011 record by more than one foot.

"Comparisons to 2011 were inevitable," the NWS office in Iowa tweeted, "but these floods have resulted in many more rescues and widespread damage in eastern Nebraska and western Iowa."

Failing levees were blamed for flooding in numerous communities -- damaging homes and businesses.

The US Army Corps of Engineers, which maintains federal levee systems, said a majority were compromised along an approximately 100-mile portion of the Missouri River in southeast Nebraska.

At least two deaths have been linked to the flooding.

Homes are surrounded by floodwater from the Pecatonica River in Freeport, Illinois.

Authorities say flooding from the Platte River and other waterways is so bad that just one highway lane into Fremont remains uncovered, and access to that road is severely restricted.

Floodwaters surround an Iowa Department of Transportation facility in Lowa.

Military base under water

Hundreds of people were rescued in Nebraska, where 54 cities issued emergency declarations, as did four Native American tribal areas.
Fremont, a city of more than 25,000, was surrounded by floodwaters over the weekend and cut off from aid.

It finally received food and other emergency supplies Sunday after crews managed to clear debris and mud from a road, officials said.
Three dozen Iowa counties were under states of emergency.

Roads were closed throughout Wisconsin and more than 200 people were evacuated, according to officials.

A third of Offutt Air Force Base in Nebraska was overcome with floodwater, and was not expected to be dry again until Thursday.

"It's important to understand that this is going to take weeks and months to recover so this will be a prolonged effort,

A Nebraska farmer died Thursday, during the height of the storm, trying to rescue a motorist stranded by floodwaters, the Omaha World-Herald reported.

On the same day, 80-year-old Betty Hamernik died after being trapped by floodwaters in her home in rural Columbus, Nebraska, according to the newspaper.

Aleido Rojas Galan, 55, was killed Friday in Iowa when his vehicle was swept away by floodwaters, TV station KETV said.