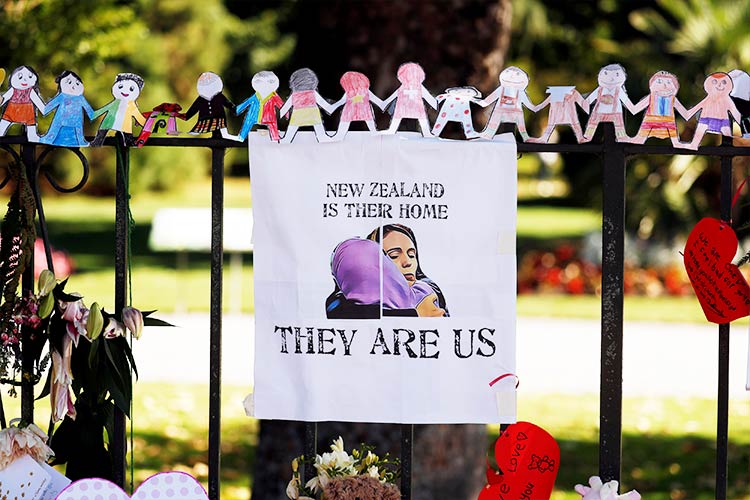 A poster hangs at a memorial site for victims of Friday's shooting, in front of Christchurch Botanic Gardens in Christchurch.

CHRISTCHURCH/WELLINGTON: Preparations were underway on Tuesday to begin burials of victims from the Christchurch mosques attacks after days of intense grieving for the 50 people killed by a lone gunman in New Zealand's worst-ever mass shooting.
Bodies of the victims of Friday's attacks were being washed and prepared for burial in a Muslim ritual process, with teams of volunteers flown in from overseas to assist with the heavy workload.

"We've been very conscious of the need to work sensitively with requirement of each family," Sarah Stuart-Black, Director for the Ministry of Civil, Defence & Emergency Management, said at a press conference in Christchurch. 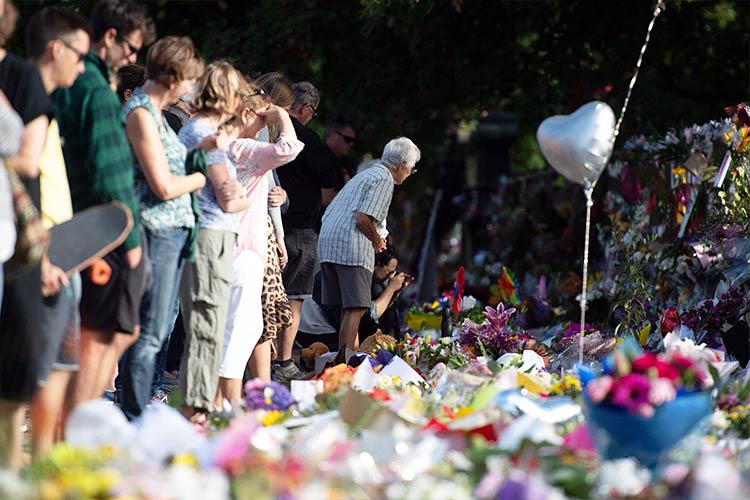 Floral tributes to those who were gunned down at the two mosques are seen against a wall bordering the Botanical Garden in Christchurch.

Australian Brenton Tarrant, 28, a suspected white supremacist who was living in Dunedin, on New Zealand's South Island, was charged with murder on Saturday. Tarrant was remanded without a plea and is due back in court on April 5, where police said he was likely to face more charges.

The victims, killed at two mosques during Friday prayers by a gunman with semi-automatic rifles, were largely Muslim migrants, refugees and residents from countries including Pakistan, Bangladesh, India, Turkey, Kuwait, Somalia and others.
Families of the victims are desperately seeking to come to New Zealand for the funerals. Immigration New Zealand said 65 visas have been granted for travelling family members.
The attack also left 50 people injured of which 30 still in the Christchurch hospital, authorities said. Nine of them are in a critical condition. One four-year-old child was transferred to a hospital in Auckland in a critical condition.
In a condolence speech in parliament on Tuesday, Prime Minister Jacinda Ardern called on the country to support its grieving Muslim community, especially when they return to pray on Friday.

"We are one. They are us, Al salam Alaikum," meaning "Peace be upon you". 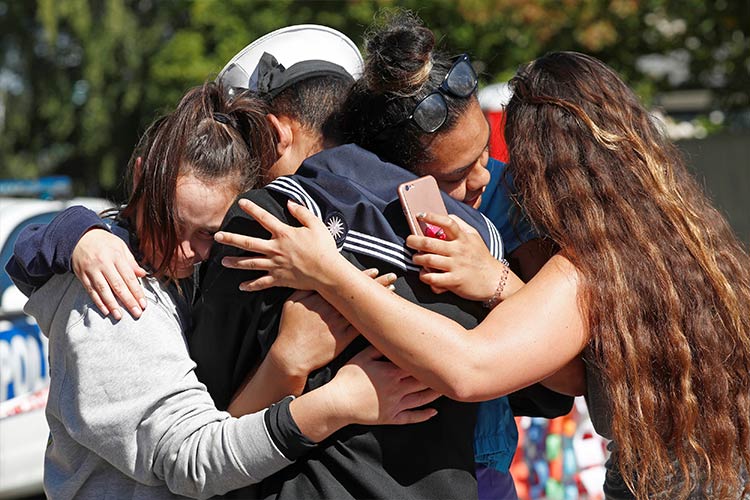 Able Rate Abdul Iskandar, who said he was supposed to be at Masjid Al Noor mosque on Friday, the day the shooting, is comforted by bystanders.

The gunman used a semi-automatic AR-15 during the mosque shootings, police said. A New Zealand gun shop owner said the store had sold Tarrant four weapons and ammunition online between December 2017 and March 2018, but not the high-powered weapon used in the massacre.

Ardern has said she supports a ban on semi-automatic weapons and that cabinet has made in-principle decisions to change gun laws which she will announce next Monday.

But a debate is raging in the country on gun laws. While some New Zealanders have voluntarily surrendered guns, others have been buying more from gun stores to beat the ban.

A gun club in the northern town of Kaitaia burned down early on Tuesday and police were treating the blaze as suspicious.

Simon Bridges, leader of the opposition National Party, said he wanted to get details of the changes to see if there could be bipartisan support in parliament. The Nationals draw support from rural areas, where gun ownership is high.

"We know that change is required. I'm willing to look at anything that is going to enhance our safety - that's our position

Ardern has said that Tarrant emailed a "manifesto” to more than 30 recipients including her office, nine minutes before the attack but it gave no location or specific details. In the document, which was also posted online, Tarrant described himself as "Just a ordinary White man, 28 years old”.

Andrew Little, the minister who oversees New Zealand's intelligence agencies, said monitoring of online activity had been stepped up in the wake of the Christchurch attacks.

"There are people who have been online making statements who have been interviewed by the police; that will continue. There is a level of intervention, there is a heightened level of monitoring," Little said on TVNZ on Monday night.

Ardern said there would be an inquiry into what government agencies "knew, or could or should have known" about the alleged gunman and whether the attack could be prevented.

More than 250 New Zealand police staff are working on the inquiry in the attacks, with staff from the U.S. FBI and Australia's Federal Police working with local investigators.