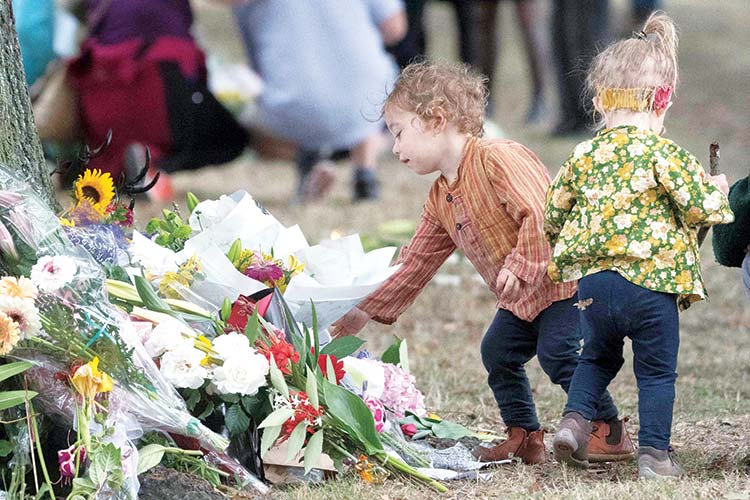 A child adds a flower to tributes across the road at the Masjid Al Noor mosque in Christchurch on Tuesday. Agence France-Presse

New Zealand Prime Minister Jacinda Ardern vowed on Tuesday never to utter the name of the twin-mosque gunman as she opened a sombre session of parliament with an evocative “as salaam alaikum” message of peace to Muslims.

“He will face the full force of the law in New Zealand,” Ardern promised grieving Kiwis, while promising that she would deprive the man who slaughtered 50 people in Christchurch of the publicity he craved.

“He sought many things from his act of terror, but one was notoriety,” she told assembled lawmakers of the 28-year-old Australian accused of the slaughter.

“That is why you will never hear me mention his name. He is a terrorist. He is a criminal. He is an extremist. But he will, when I speak, be nameless.”

“I implore you: Speak the names of those who were lost rather than the name of the man who took them.”

Dressed in black, the 38-year-old leader opened her remarks in parliament with the symbolism of the greeting uttered across the Islamic world.

“Wa alaikum salaam wa rahmatullahi wa barakatuh” she said -’May the peace, mercy, and blessings of Allah be with you too.’

She closed her address by noting that “on Friday, it will be a week since the attack, members of the Muslim community will gather for worship on that day. Let us acknowledge their grief as they do.”

Her comments came as dozens of relatives of the deceased began arriving from around the world ahead of expected funerals which have already been delayed far beyond the 24 hours after death usually observed under Islamic custom.

In the wake of the mass shooting, Ardern has promised to reform New Zealand gun laws that allowed the gunman to legally purchase the weapons he used in the attack on two Christchurch mosques, including semi-automatic rifles.

New Zealanders have already begun answering government appeals to hand in their weapons, including John Hart, a farmer in the North Island district of Masterton.

Hart said it was an easy decision for him to hand in his semi-automatic and tweeted that “on the farm they are a useful tool in some circumstances, but my convenience doesn’t outweigh the risk of misuse. We don’t need these in our country.”

Turkish President Tayyip Erdogan on Tuesday called on New Zealand to restore the death penalty for the gunman who killed 50 people at two Christchurch mosques, warning that Turkey would make the attacker pay for his act if New Zealand did not.

“You heinously killed 50 of our siblings. You will pay for this. If New Zealand doesn’t make you, we know how to make you pay one way or another,” Erdogan told an election rally of thousands in northern Turkey. He did not elaborate.

As the first bodies of the Christchurch mosque shooting victims were returned to grieving families, Muslim volunteers from across New Zealand and Australia descended on the small town to help in the burial process.

Islamic custom dictates that people have to be buried as soon as possible, but the scale and devastation of Friday’s massacre has delayed the handover of bodies to next of kin.

Police said that just six bodies have been released so far and a total of 12 victims identified. As anguished relatives wait, waves of volunteers have driven or flown in to ease the burden on exhausted locals.

“We are a Muslim community, regardless of where we are situated through the country and the world, there is always going to be a connection with other Muslims when tragedy occurs,” Javed Dadabhai, a volunteer from Auckland, said.

“Quite specifically, Christchurch is a small community, so... when you see a loss of 50 people, you really need to come down and help in whichever you can.”

While there has been no figures on the number of volunteers who have travelled to Christchurch, large numbers have been walking in and out of a family support centre near the Al Noor Mosque where dozens were killed by a white supremacist.

Sohail Ibrahim was among the volunteers who packed his bags and hopped onto a plane from Sydney when a call came from his mosque for helpers.