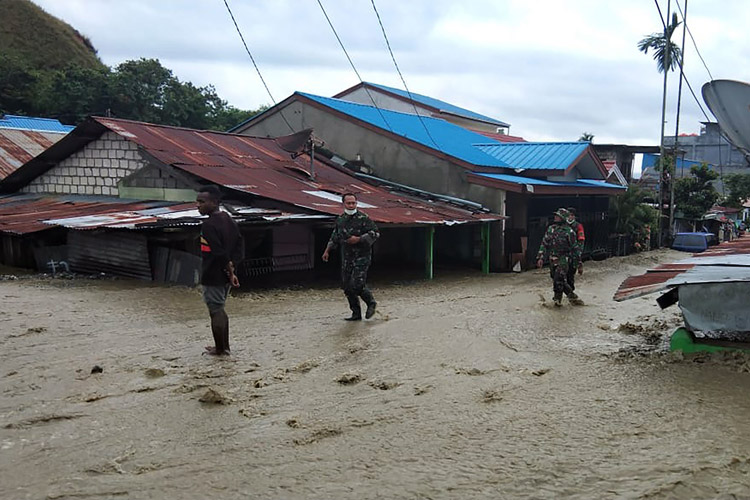 Soldiers are looking for survivors in a flooded area in Sentani, Indonesia. AFP

JAYAPURA: The death toll from flash floods and mudslides triggered by torrential downpours in Indonesia's easternmost province has risen to 89, with dozens of others missing, officials said on Tuesday.

National Disaster Mitigation Agency spokesman Sutopo Purwo Nugroho said the worst-hit area from the flooding was Sentani subdistrict, where tons of mud, rocks and trees from a landslide on a mountain rolled down to a river that burst its banks, sweeping away residents.

He said 89 bodies had been pulled from the mud and wreckage of crumpled homes by Tuesday. Another 159 people were injured, including 84 who were hospitalized, many with broken bones and head wounds.

The number of dead is expected to rise as rescue workers comb through affected areas.

More than 1,600 rescuers, including soldiers and police, faced difficulties on Tuesday in clearing huge piles of debris due to shortages of heavy equipment, said Papua military spokesman Col. Muhammad Aidi.

“We face difficulties removing debris and the bodies under rubble as we don't have enough excavators,” Aidi said, adding that rescuers were searching for 74 people reportedly missing and feared dead.

Nugroho said about 7,000 residents were displaced from their homes, with more than 400 houses and other buildings damaged and thousands of others submerged.

Seasonal downpours cause frequent landslides and floods that kill dozens each year in Indonesia, a chain of 17,000 islands where millions of people live in mountainous areas or near fertile flood plains.