Trump complains he is being blamed for N.Zealand attack - GulfToday

Trump complains he is being blamed for N.Zealand attack 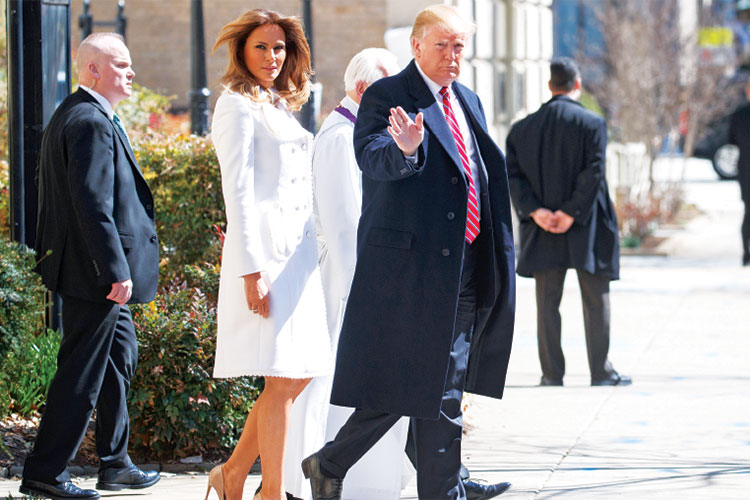 Trump and Melania walk to their motorcade after attending church in Washington on Sunday. Associated Press

US President Donald Trump waded Monday into the controversy over his response to the massacre of 50 people in two New Zealand mosques, complaining that he was being blamed for the tragedy.

“The Fake News Media is working overtime to blame me for the horrible attack in New Zealand,” Trump told his more than 59 million followers on Twitter.

“They will have to work very hard to prove that one,” he tweeted. “So Ridiculous!”

Trump appeared to be referring to criticism of his response to the attack, which was allegedly carried out by a 28-year-old white supremacist claiming to be resisting genocide against white people.

In a lengthy written rant, the alleged killer referred to Trump as “a symbol of renewed white identity.”

Trump did on several occasions tweet and speak to condemn the “horrible” attack and offer any US assistance to New Zealand’s authorities.

However, he courted controversy Friday when he played down the wider implications of the gunman’s ideology, saying that violent white nationalism is not a growing problem.

“It’s a small group of people,” he said.

“The primary terrorist threat to the United States continues to be from Islamist militants and those they inspire, but we should not and cannot and must not ignore the real and serious danger posed by domestic terrorists,” she said.

“They are using the same do-it-yourself, mass murder tactics as we saw with the horrible assault last week in New Zealand against Muslim worshipers,” she said.

Trump’s dismissal of a broader security threat led to a flurry of criticism from Democrats and other critics over the weekend.

They pointed to his frequent labeling of illegal immigrants as invaders, his high-profile restrictions on immigration from several Muslim-majority countries, and a lukewarm condemnation of a neo-Nazi march in Charlottesville, Virginia, in 2017.

“Time and time again, this president has embraced and emboldened white supremacists -- and instead of condemning racist terrorists, he covers for them. This isn’t normal or acceptable,” tweeted Kirsten Gillibrand, who formally entered the Democratic race for the White House Sunday.

Acting White House chief of staff Mick Mulvaney went on television Sunday to push back, saying “the president is not a white supremacist. I’m not sure how many times we have to say that.”

“To simply ask the question every time something like this happens overseas, or even domestically, to say, ‘Oh, my goodness, it must somehow be the president’s fault,’ speaks to a politicization of everything that I think is undermining sort of the institutions that we have in the country today,” he said on Fox television.

Trump on Monday gave possible 2020 presidential election rival Joe Biden a taste of what to expect if he does jump in the race, with a tweeted insult about his intelligence.

Biden, who was vice president under Barack Obama and is seen as potentially the most heavyweight Democrat, remains on the sidelines. However on Saturday he appeared to confirm his candidacy before correcting himself in mid-sentence, as if having made a slip of the tongue.

Trump, who delights in inventing mocking nicknames and poking fun at opponents, pounced.

“Joe Biden got tongue tied over the weekend when he was unable to properly deliver a very simple line about his decision to run for President,” Trump tweeted. “Get used to it, another low I.Q. individual!”

Biden’s surprise slip -- or, as some speculated, crafty hint -- came during a speech in his home state of Delaware.

“I’m told I get criticized by the new left. I have the most progressive record of anybody running for the United...,” he said, immediately correcting himself -- “anybody who would run.”

Trump spent St. Patrick’s Day morning worshipping at the “Church of the Presidents” near the White House in between tweeting about everything from “Saturday Night Live” parodies of him to the late Sen. John McCain to the recent closure of a General Motors factory in Ohio.