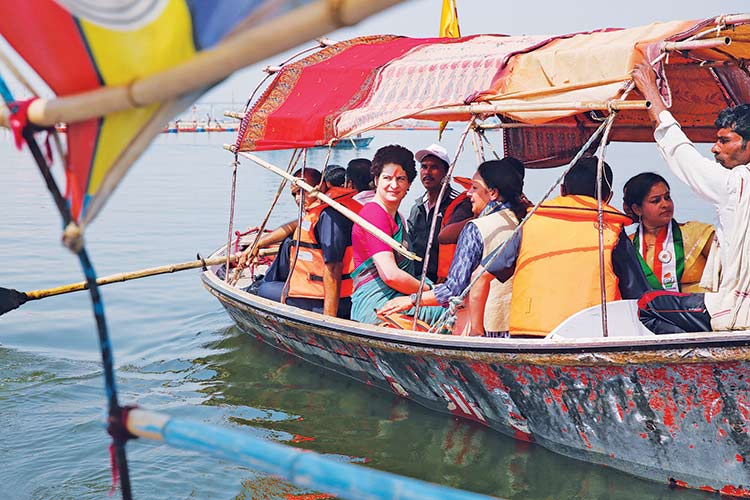 Prayagraj: With less than a month to go for the 2019 Lok Sabha elections, Congress General Secretary and eastern Uttar Pradesh in-charge Priyanka Gandhi Vadra on Monday kicked off her political campaign from here.

She offered prayers at the temple, as well as to the river Ganga.

She then embark on her much anticipated boat ride from the Manaiya Ghat in Kachnar tehsil of Prayagraj district, according to party leaders.

On the first day of her three-day river ride from Prayagraj to the parliamentary constituency of Prime Minister Narendra Modi, she will cover the distance up to Sitamarhi ghat in Bhadohi district.

On her way from Manaiya to Sitamarhi, she will make her first pit stop at Dumduma ghat and interact with the villagers.

The 47-year-old younger sibling of Congress President Rahul Gandhi will also hold discussion with students onboard the boat that are being called “Sanchi baat”. Priyanka Gandhi is also supposed to meet the family members of a slain Central Reserve Police Force trooper, who died in the February 14 Pulwama attcak.

After leaving Dumduma ghat, the Congress leader will reach Sirsa ghat and then also visit the Lakshagrih ghat.

She was expected to arrive at Sitamarhi ghat in the evening.

On Sunday, she held marathon meetings with party workers at the Nehru Bhawan party’s state headquarters in Lucknow. Congress had won only two seats from the state in 2014.

Priyanka Gandhi Vadra’s arrival in Lucknow on Sunday has once again enthused party workers ahead of the crucial 2019 Lok Sabha elections.

Priyanka Gandhi, who held her last meeting at the Nehru Bhawan office on Feb.14 during her first visit after being made in charge of eastern Uttar Pradesh, returned to the stage capital on Sunday to meet party workers and groups who had been protesting against Yogi Adityanath-led BJP government in the state.

Soon after her arrival at the party office, scores of Congress workers gathered to cheer her and raise slogans against Prime Minister Narendra Modi. They also played Holi with each other.

Surendra Singh, a former state Minister during Congress rule in the 1980s, told IANS that “conditions in the state have changed after the arrival of Priyanka Gandhi in active politics”.

Singh, who hails from Ballia and was to meet her along with other leaders, said, “People are excited to listen to Priyanka Gandhi as she is the daughter of the state.” On her proposed river tour from Prayagraj to Varanasi from March 18 to 20, Congress worker Shahshi Kant Tripathi said, “During her river ride, she will connect with the people of lower castes like the fishermen community, Bind community and others residing near the banks of the Ganga.” Tripathi also said that during her journey, Priyanka Gandhi will also dent the upper caste votes of the Bharatiya Janata Party as she will touch many Rajput and Brahmin dominated villages during her journey.

In a dig at Prime Minister Narendra Modi, another party worker, Anurag Tripathi from Rae Bareli said, “Ganga maiya ne Priyanka didi ko bulaya hai, kyuki unka ek beta jumlebaaz nikla (Mother Ganga has called sister Priyanka, because one of her sons turned out only to be champion of rhetoric).” Priyanka Gandhi, considered the second most prominent leader in the party after her brother and party President Rahul Gandhi, is being seen as a turn-around leader for the party in the state, where it was reduced to its family boroughs of Amethi and Rae Bareli seats in the 2014 elections, while BJP-led NDA alliance won 73 out of the state’s 80 seats.

Uttar Pradesh will vote in all seven phases of the Lok Sabha elections scheduled from April 11 to May 19. The counting of votes will take place on May 23.

The Congress announced it would contest all 42 Lok Sabha constituencies in West Bengal as its seat adjustment talks with the Left Front have collapsed.

“We do not think that we need any alliance by compromising our party’s dignity. To maintain the dignity of the party, we don’t have any other option than fight,” state Congress chief Somen Mitra told media persons at the state party headquarters Bidhan Bhavan here.