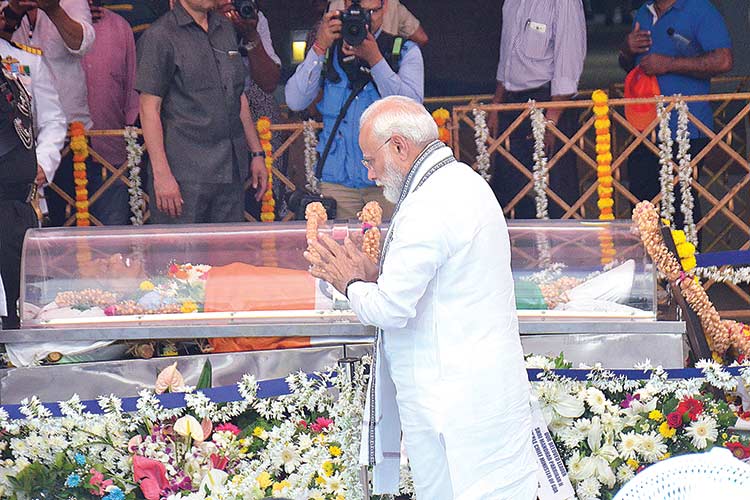 Goa Chief Minister Manohar Parrikar’s final rites were more important than a government formation, the coastal state’s BJP unit said on Monday, even as ongoing negotiations between allies and BJP leaders, including Nitin Gadkari and the party’s National Secretary BL Santosh, have appeared to hit a roadblock.

After the first round of talks failed early Monday morning, state BJP president Vinay Tendulkar said Parrikar’s last rites would be handled before any government formation process is discussed again.

“We will first have to pay a visit to his mortal remains. Then his body will be taken to the party office and after that a decision will be taken,” Tendulkar told the media after the meeting which was held at a city resort.

Lobo echoed Tendulkar’s statement, saying: “Today (Monday) Manohar ji’s final rites and other things have to be done. That is the first priority. Solution will come tomorrow.” The BJP MLA also said that during the meeting with Gadkari and Santosh, Dhavalikar had put forth a proposal to make him the Chief Minister of the coalition government.

“Dhavalikar wants to become Chief Minister. He has put his demand. That is being worked out. Dhavalikar said that he had sacrificed many times by supporting the BJP. But the BJP will not agree his demand.” Lobo that the BJP has shortlisted Vishwajit Rane and Pramod Sawant for the post of Chief Minister.

In his brief interaction with the media, Dhavalikar did not confirm about his pitch for Chief Ministership, but said that he would meet BJP leaders again soon following discussions with the state executive committee of his regional party.

“Nothing has been decided yet... Whatever decision the MGP takes, we will have to take a resolution of the executive committee and give it to them,” Dhavalikar said.

President of the Goa Forward party Vijai Sardesai said that several issues were discussed during the meeting, but there was no uniform agreement on every aspect.

“Basically how the government should function, who should be delegated what responsibilities and how we could go forward. We have told them. They have agreed on certain things, they said they will get back on certain things,” Sardesai told the media here.

Goa has descended into a political crisis, following Parrikar’s death on Sunday evening due to advanced pancreatic cancer. His final rites will be conducted on Monday evening.

The MGP, Goa Forward and four independent MLAs were a part of the BJP-lead coalition government from 2017, which was headed by Parrikar.

Meanwhile, state Congress President Girish Chodankar said the party was working on a strategy to come to power and that several non-Congress legislators were in touch with him.

“We have some strategies in place and we are hopeful that the Governor calls us soon (invitation to stake claim) because we have the number that is required. We are in touch with many MLAs,” Chodankar told the media here.

Gadkari arrived in the coastal state late Sunday night to negotiate with regional parties and independent MLAs for the formation of a new coalition government following Parrikar’s death earlier on Sunday due to advance pancreatic cancer.

But party sources said that no breakthrough was in sight yet, despite the meeting continuing until 4.30am.

After a brief stop at the Bharatiya Janata Party headquarters, Parrikar’s body will be moved to a state-run arts and culture complex to allow members of the public to pay their last respects.

It will be later moved to Panaji’s Miramar beach for the final rites.

A new BJP-led coalition government in Goa will be in place by Monday morning, party legislator Michael Lobo said.