‘No sign yet of imminent N.Korea missile launch’ - GulfToday 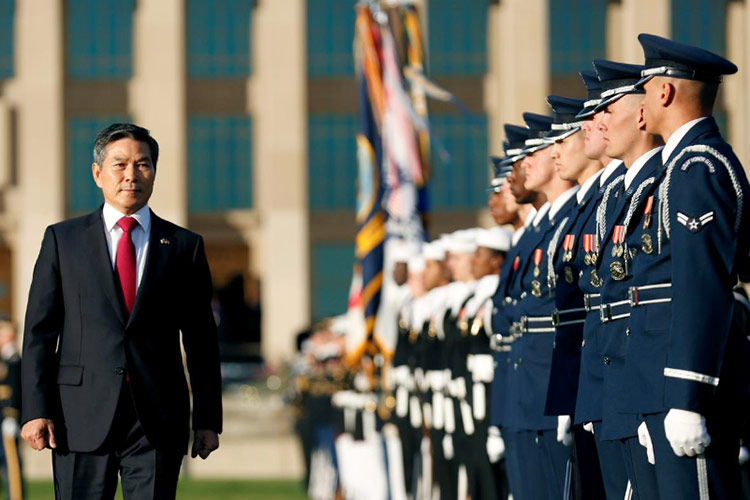 It is premature to say whether recent activity at some of North Korea’s rocket facilities involved preparation for a missile launch, South Korea’s defence minister told a parliamentary hearing on Monday. Early in March, several American think-tanks and South Korean officials reported that satellite imagery showed possible preparations for a launch from the Sohae rocket launch site at Tongchang-ri, North Korea, which has been used in the past to launch satellites but not intercontinental ballistic missiles capable of delivering a nuclear warhead.

“Tongchang-ri is a launch site but we don’t see any activity being carried out for a missile launch.” When asked if he could confirm whether Sohae was functionally restored, Jeong said it was inappropriate for intelligence authorities to comment on every media report one way or the other.

He also said there were signs of continued nuclear activity in North Korea, without elaborating.

Unification Minister Cho Myoung-gyon told a separate parliamentary panel that it was possible that the recent developments at the missile site were to bolster North Korea’s leverage in negotiations.

“But given North Korea’s continued work, thorough analysis is needed to find out its exact intentions,” Cho said.

He said that there have been signs of reconstruction at Sohae since late last year and that the rebuilding has now been done to a “substantial level.”

Analysts at the James Martin Center for Nonproliferation Studies in California said they estimated that the rebuilding at Sohae appeared to begin in earnest shortly before US President Trump met North Korean leader Kim Jong Un at a summit in Hanoi late last month.

The summit broke down over differences about US demands for North Korea to denuclearize and North Korea’s demand for substantial relief from international sanctions, imposed on the country because of its nuclear and missile tests.

On Friday, North Korean Vice Foreign Minister Choe Son Hui told foreign diplomats and journalists in Pyongyang that Kim was considering suspending talks with the United States and may rethink a freeze on missile and nuclear tests unless the United States made concessions.

Trump said after his first summit with Kim in Singapore last June that Kim had promised to dismantle the Sohae test site, a pledge the North Korean leader reiterated and expanded on at a summit with Moon in September.

North Korea has used Sohae to launch satellites into space since 2011, and the United States says its work there has helped develop missile technology.

A satellite launch in April 2012 killed off an Obama administration deal for a freeze in North Korean nuclear and missile testing reached weeks earlier.

On Wednesday, 38 North, a group that monitors North Korea, reported that there had been no new activity at Sohae since March 8.

On Friday, the group reported that satellite imagery showed no activity at North Korea’s Yongbyon nuclear reactor complex, or at dismantled facilities at the Punggye-ri nuclear test site.

Meanwhile, in an unrealted development on Monday South Korean police sought an arrest warrant for a K-pop star accused of filming and distributing illicit sex videos in a burgeoning scandal that has rocked the country’s music industry.

Singer-songwriter Jung Joon-young last week admitted to filming himself having sex and sharing the footage without his partners’ consent.

The videos of at least 10 women were shared through mobile chatrooms in 2015 with recipients including fellow K-pop star Seungri of BIGBANG.

After opening an investigation, Seoul police said Monday an arrest warrant has been requested for Jung on charges of sexual offences using cameras, according to Yonhap news agency.

Police are also seeking an arrest warrant for another male − a nightclub employee who was part of the chatroom with Jung − for sharing sex videos.

The 30-year-old musician Jung announced his retirement from the entertainment industry last week and the scandal has seen two other male singers quitting after admitting they watched the illicit videos.