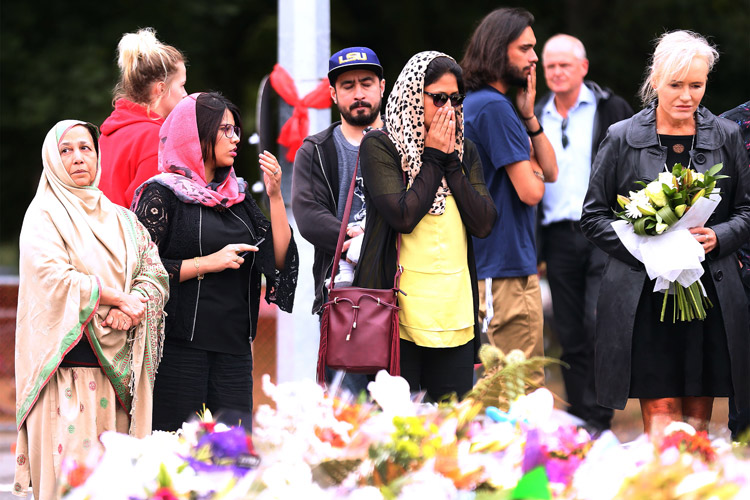 People react as they look at the floral tributes laid near the Al Noor mosque in Christchurch on Monday. David Moir/ AFP

WELLINGTON: The owner of a New Zealand gun store said on Monday the man charged with murder in Christchurch’s mass shooting had bought firearms and ammunition online from the store, but it did not sell him the high-powered weapon used in the mosque shootings.

“The MSSA, military-style automatic, reportedly used by the alleged gunman was not purchased from Gun City. Gun City did not sell him an MSSA, only A-category firearms,” Tipple told a new conference in Christchurch.

Fifty people were killed and dozens wounded at two mosques in Christchurch on Friday.

Under New Zealand gun laws A-category weapons can be semi-automatic but limited to seven shots. Video of the gunman in the mosque showed a semi-automatic with a large magazine round.

Tipple said the online purchase followed a police-verified online mail-order process and the firearms were bought in three or four purchases.

“We detected nothing extraordinary about the licence holder. He was a brand new purchaser, with a brand new licence,” he said.

A standard A-category firearm licence is issued after a police and background check. No licence is required to buy a large round magazine, which can be illegally modified for use in such a weapon.

The minimum age for a gun license is 16, and 18 to own a semi-automatic weapon.

Tightening New Zealand’s gun laws is at the top of Prime Minister Jacinda Ardern’s agenda as she meets with her cabinet on Monday.