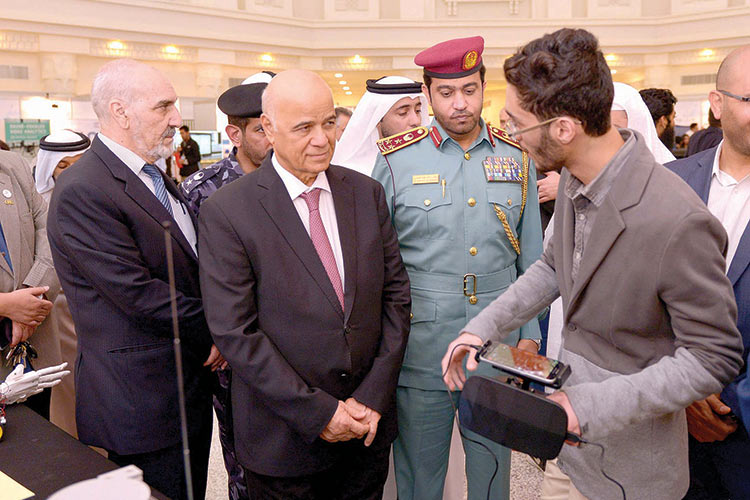 A student shows his research project at the exhibition.

SHARJAH: Prof Hamid MK Al Naimiy, Chancellor of the University of Sharjah, inaugurated the “1st Engineering Scientific Clubs  Exhibition” under the slogan 3D Printing and Drones Technology: A New Era. The Exhibition aims to showcase the projects of the College of Engineering students as they got the opportunity to present their research projects in 3D printing and drones technologies  as well as their applications in a number of fields.

During the exhibition, which was attended by many local national institutions and a large number of private institutions,  a number of the College students presented an aerial show of drones through which the flag of the country and the slogan of tolerance were raised. Then the Chancellor toured the exhibited engineering projects on 3D printing and drones’ technology and how to  use them optimally through new and innovative ideas applied in the fields of industrial engineering and engineering management, architecture, civil and environmental engineering, nuclear, sustainable and renewable energy engineering, electrical engineering  and computer engineering.

Prof. Abdul-Kadir Hamid, Acting Dean of the College of Engineering, stated that the aim of the exhibition is to highlight  the efforts of the students of the College and to emphasize the quality of the projects presented during the academic year. It also aims to introduce the local community to the latest developments reached by the students in these fields in order to build strategic  partnerships with the industrial sector and the academic education sector seeking to serve and develop society. He added that the students’ projects were based on three main axes, the first of which is the 3D printer technology and its  various applications, while introducing students to the latest developments in this field. The second axis deals with the work of drones and their applications in different aspects of life such as fire extinguishing, rescue operations, and civil defense. The  third axis dealt with the technology of automatic controls and their applications. Some scientific societies also presented projects for the use of sustainable and renewable energy in desalination water and electric power production. Dr Khalid Hamad Al Hammadi, Director of Sharjah Police Research Center, attended the inauguration along with Engineer Fatima  Abdullah Alblooshi from RTA Dubai; Prof. Elsiddig Ahmed ElMustafa El Sheikh, Vice Chancellor for Academic Affairs; Prof. Maamar Bettayeb, Vice Chancellor for Research and Graduate Studies.