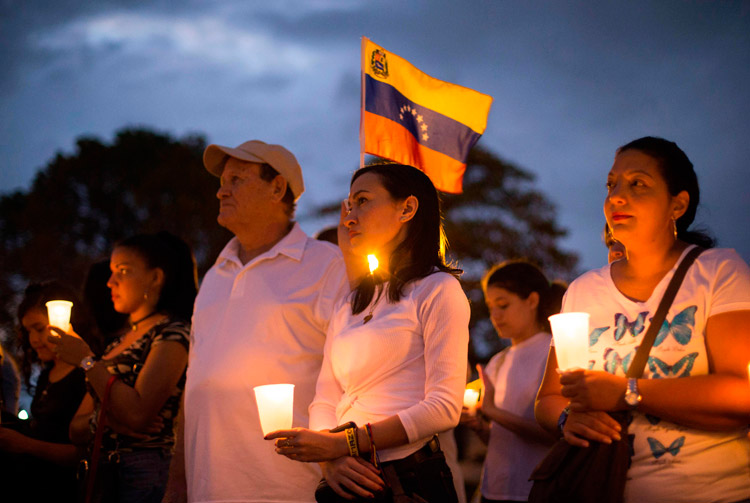 People take part in a demonstration called by the Venezuelan opposition diaspora in the Dominican Republic to protest against the government of Nicolas Maduro at the Parque Espana park in the colonial historic area of Santo Domingo on Saturday. Erika Santelices / AFP

VALENCIA (Venezuela): Venezuelan opposition leader Juan Guaido embarked on a new stage of his campaign to oust President Nicolas Maduro on Saturday as the rivals held competing rallies in the capital of Caracas, a pattern which has unfolded repeatedly as both sides attempt to convey strength.

Addressing large crowds in the northern city of Valencia, Guaido pledged to deliver a better life for struggling Venezuelans as he began a planned tour of the country gripped by an economic and political crisis.

"We're stronger than ever," said US-backed Guaido from a podium draped with a large Venezuelan flag.

The leader of the opposition-controlled National Assembly also drew cheers with his denunciations of Maduro, although he warned that difficult challenges still lie ahead.

Earlier in the day, he visited a cathedral and a market in Valencia, where people flocked to take his picture and shake his hand.

Since returning to Venezuela from a Latin American tour on March 4, Guaido has led anti-government activities in the capital of Caracas and announced plans to take his message to other regions. But he has been unable to force Maduro to step down and hold elections. 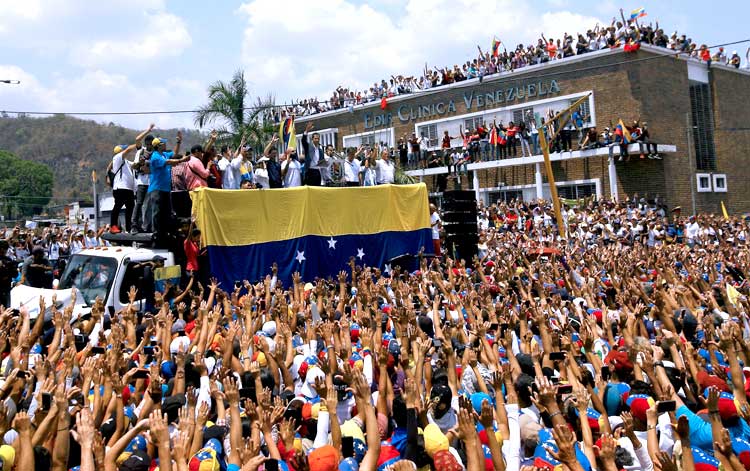 As Guaido, 35, kicked off his "operation freedom" in the northern city of Valencia, the pro-Maduro military staged the latest in a series of exercises.

The drill focused on defending hydroelectric infrastructure from attack -- a reaction to a weeklong national blackout that Maduro blamed on US "sabotage" but experts said was more likely the result of years of neglect.

Guaido, the head of the opposition-ruled National Assembly whose claim to be caretaker president is recognized by the US, Canada and much of Latin America and Europe, vowed he would "very soon" take up office in Miraflores, the presidential palace.

He has been pushing for nearly two months against Maduro after declaring himself acting president during street rallies by tens of thousands, following Maduro's swearing-in for a second term despite elections widely dismissed as a sham.

"We are going to reclaim what belongs to the people," Guaido told thousands of supporters on Saturday.

"We are going to reclaim what belongs to the people

Maduro, he said, "believes that a thieving gang or a palace makes him president. It's only the support of our people that makes someone president of a nation and he doesn't have that. And not much longer will he be in that palace."

Guaido offered no timeline for the mobilization across Venezuela, which he said will culminate with a march on the presidential palace in Caracas.

"I'm ready to head over to Miraflores right now, wherever my future president Juan Guaido asks me to go," said one of his supporters, Milagros Lima, 50, a lawyer. She told AFP that her "whole family" are among the millions who have fled the country's dire shortages of food and medicine.

"If it weren't for them, we'd be starving to death," she said.

Accompanying Guaido on his tour are opposition lawmakers tasked with creating citizen assemblies -- "freedom cells" -- across the country. The opposition said that, by Saturday, around 50 had already been set up in half of Venezuela's 23 states.

"Whatever happens, we must be united, mobilized in the streets," Guaido said, adding that he has not ruled out asking the National Assembly to activate a constitutional clause allowing foreign military intervention -- though such a move "depended on others."