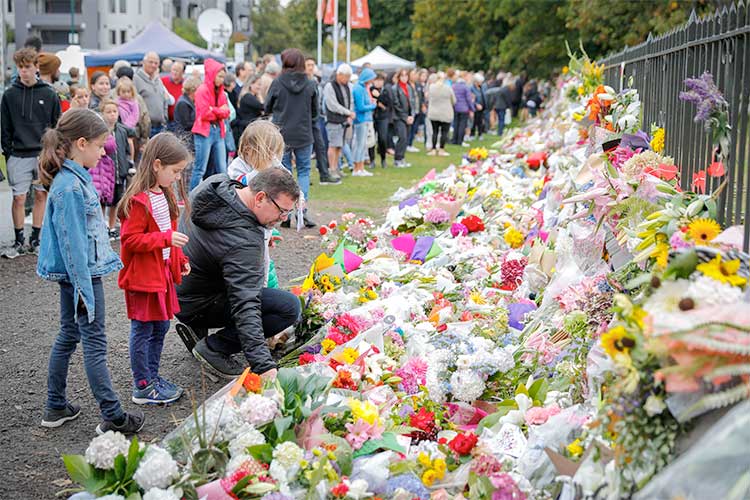 Mourners lay flowers on a wall at the Botanical Gardens in Christchurch on Saturday. Associated Press

New Zealanders flocked to pay tribute on Sunday to the 50 worshippers slain in a twin mosque attack, as families clamoured for the return of their dead.

Coroners said they hoped to let grieving relatives fulfil Islamic burial customs soon, but insisted they had to move carefully through their investigation into the horrific multiple murder.

Farid Ahmad, whose 44-year-old wife Husna was killed as she rushed back into a mosque to rescue him, refused to harbour hatred towards the alleged gunman, Australian-born, self-avowed white nationalist, Brenton Tarrant.

“I would say to him ‘I love him as a person,’” Ahmad, who uses a wheelchair, said.

Asked if he forgave the 28-year-old suspect, he said: “Of course. The best thing is forgiveness, generosity, loving and caring, positivity.”

Husna Ahmad was among four women believed to have been killed by Tarrant, who documented his radicalisation and two years of preparations in a lengthy, meandering and conspiracy-filled far-right “manifesto.”

Prime Minister Jacinda Ardern said her office and some 30 other officials had received the document by email about nine minutes before the attack.

The country remained on high alert on Sunday, with police closing an airport in the southern city of Dunedin -- where Tarrant had lived -- after an unidentified package was spotted on the airfield.

“It’s a massacre, what else do they need to know?” said school principal Sheikh Amjad Ali, expressing frustration with the wait for loved ones’ remains.

Islamic custom dictates that the dead should be buried within 24 hours, but strained authorities, desperate to make sure no mistakes are made or the complex investigation harmed, said a quick process was difficult.

“All of the deceased have had a CT scan, their fingerprints are taken, the property they were wearing or had with them is removed,” said Chief Coroner Deborah Marshall, adding that dental impressions were taken and post-mortems performed.

Ardern said she expected all the dead would have been returned to their families by Wednesday.

Among those fighting for their lives is four-year-old Alin Alsati. The pre-schooler was praying alongside her father Wasseim at the Al Noor mosque when she was shot at least three times.

Her father, who was also shot, recently emigrated to New Zealand from Jordan.

“Please pray for me and my daughter,” he pleaded in a Facebook video message from his hospital bed before undergoing surgery.

The number of dead and injured could have been higher, were it not for people like Afghan refugee Abdul Aziz.

Aziz was at the Linwood mosque with his four sons when he rushed the attacker armed with the only weapon he could find -- a hand-held credit card machine.

When Aziz heard one of his four sons cry “Daddy, please come back inside!” he picked up an empty shotgun discarded by the gunman and shouted “come on here” repeatedly in an effort to draw him away from his sons and the other worshippers.

“I just wanted to save as much lives as I could, even if I lose my life,” he said.

Meanwhile, after days of lockdowns, security warnings and fear, police have urged Kiwis to go back to their normal business.

When they return to work, school and hobbies on Monday however, they will find a high police presence, said commissioner Mike Bush.

Taxi driver Abdul Kadir Ababora threw himself to the floor and wedged himself under a bookshelf used to hold Holy Qurans, praying he would see his wife and kids again.

Somehow that decision saved his life and he emerged from the carnage unscathed.

“It’s just a miracle,” he said on Sunday as he revisited the scene. “When I woke up to the left and right of me it was just dead bodies.”

“This is for everyone’s safety, to reassure the public.”

On Monday, Ardern -- who spent Sunday morning with the Muslim community of Wellington -- will gather her cabinet to discuss changing the country’s gun laws.