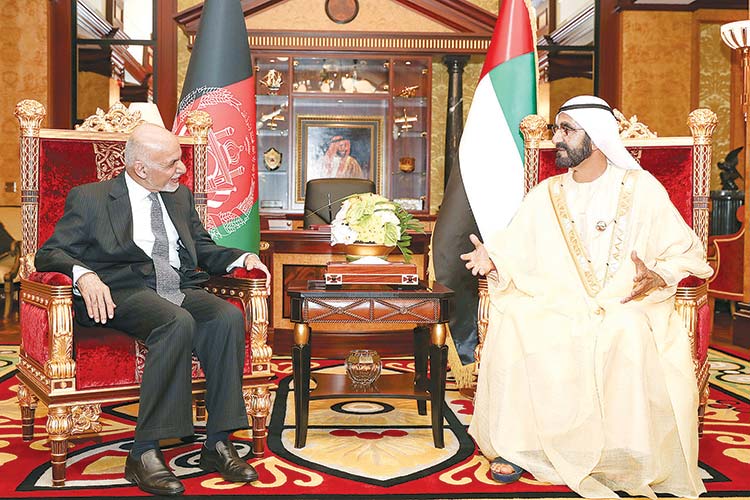 Mohammed Bin Rashid in a meeting with President Ghani. WAM

Sheikh Mohammed and Ghani reviewed bilateral relations between the UAE and Afghanistan and ways to enhance them in joint fields between the two countries.

He also wished that relations would witness more development and progress in various domains.

Ghani emphasised his country’s desire to boost cooperation in various domains. He also praised the UAE’s pioneering stature at the regional and global arenas.

Upon his arrival at the Presidential Palace in Abu Dhabi, President Ghani was accorded an official reception where the national anthems of the two countries were played, and a 21-gun salute was fired in honour of the guest.

Sheikh Mohamed bin Zayed welcomed the visit of the Afghan President and his accompanying delegation to the UAE and hoped the visit would contribute toward enhancing ties between the two countries, to achieve their mutual interest and aspirations for progress, development and prosperity.

During the meeting His Highness and President Ghani reviewed areas of cooperation in the trade and investment, development and humanitarian sectors, in addition to boosting efforts to support the reconstruction, development and peace initiatives in Afghanistan.

The two sides also reviewed issues of mutual interest, as well as regional and international developments, particularly those concerning efforts to combat terrorism and extremism, and means to achieve security, stability, and peace for the region and the world.

Sheikh Mohamed said that the UAE, under the leadership of President His Highness Sheikh Khalifa bin Zayed Al Nahyan, pays great attention to supporting regional and international efforts that aim to assist the Afghan people to overcome challenges, and obtain peace and stability within their country.

The UAE, His Highness added, is keen to continue its humanitarian and development support in education, health and social sectors of Afghanistan, which are essential pillars for development and stability in the country.

For his part, the Afghan President expressed his happiness on his visit to the UAE, praising the country’s endeavours to support the Afghan people via diverse dvelopment programmes across Afghanistan. The two sides affirmed the two countries’ efforts to develop bilateral relations in various fields of cooperation that serve their common interests and contribute to development and stability in the region.