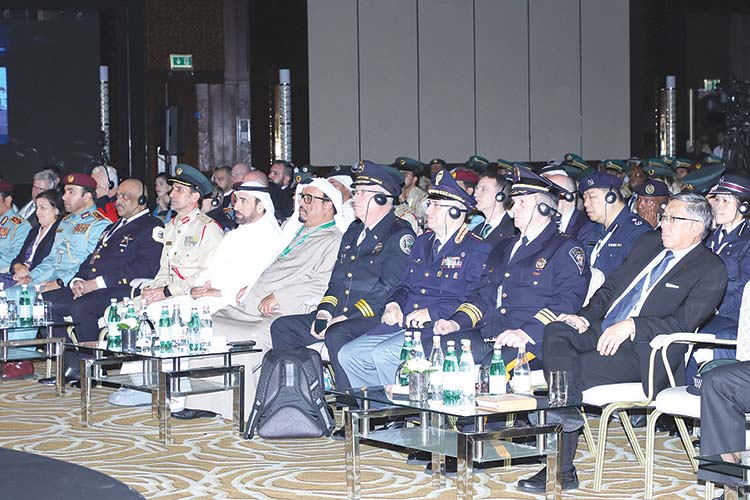 The symposium on Police Best Practices under way at the InterContinental Hotel-Festival City, Dubai.

DUBAI: Under the patronage of Sheikh Hamdan Bin Mohammed, Crown Prince of Dubai and Chairman of Dubai Executive Council, Lt General Saif Abdullah Al Shaafar, Under-Secretary of the Ministry of Interior, yesterday officially inaugurated the 12th International Symposium for Police Best Practices, which is being held from March 17 to the 20, at the Inter Continental Hotel -Festival City, Dubai, under the theme “AI and the Police of the Future.”

Brigadier Sheikh Muhammad Abdullah Al Mualla, Director of Excellence & Pioneering at the Dubai Police stressed in his opening speech on the approach taken by the Dubai Police and its keenness to train its officers and equip them with knowledge in all fields involved in the security and police work, and to exchange information and best practices with police agencies around the globe.

He added, “The symposium today is an opportunity to acquire knowledge in the field of future policing and AI, calling to focus on the best disciplines and cope with the requirements of the era, which will make us at the forefront in this field”.

Brig. Al Muallah shared with the audience the Dubai Police’s pioneering experience in the field of Artificial Intelligence, and the most important achievements made by Dubai Police in this field until the day by introducing a number of intelligent services including the world’s first Smart Police Station which.

Following the opening speech,  Lt General Al Shaafar,  Lt. General Dhahi Khalfan Tamim, Deputy Chairman of the Dubai Police and Public Security, and Major General Abdullah Khalifa Al Marri, Commander-In-Chief of Dubai Police, officially launched the www.policeindicators.com a website that acts as a “One Stop” hub for police KPIs where police forces from around the globe can compare performances and best practices.  With the new project Dubai Police hope the website will offer police forces, police executives and other interested parties the opportunity to agree on a set of core business KPIs, these KPIs can then be the basis of police performance benchmarking and analysis.

On the first day of the four-day International Symposium for Police Best Practices, world renowned policing experts from the USA, Canada, China, Singapore, UK, UAE and the United Nations will discuss a number of issues related to the fields of Cybercrime, and Innovation in Policing Education & Training under various themes and sessions.