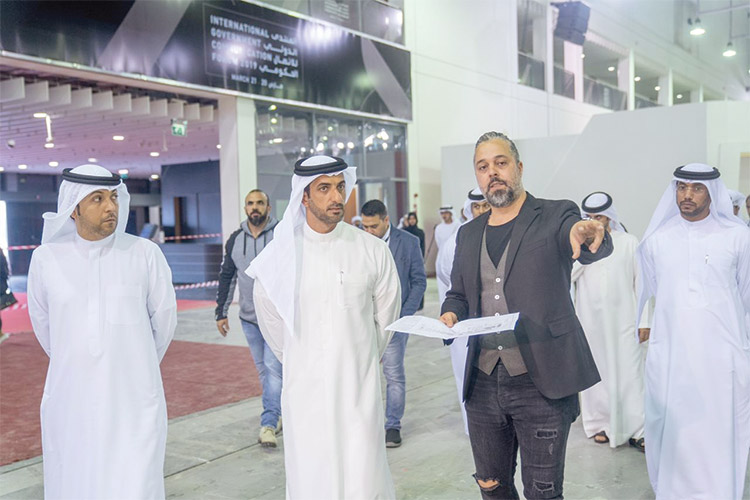 He noted that this is a result of the emirate’s efforts to bring together international experts and practitioners on one unified platform for the exchange of information and expertise, and to develop new methods and techniques for more effective government communication amid rapid technological changes.

He made this observation during his visit to Expo Centre Sharjah on Sunday while overseeing the final preparation for the eighth edition of IGCF, which will be held on Wednesday and Thursday under the theme ‘Behavioural Change Towards Human Development.’

He was accompanied by Tariq Saeed Allay, Director of Sharjah Government Media Bureau (SGMB) and other officials.

The SMC Chairman said, “The Forum’s theme ‘Behavioural Change Towards Human Development’ is a true reflection of Sharjah’s approach to participatory development. The Forum will pave the way for a clear understanding of the ways individuals can partake in governance, become agents of positive change and be the bedrock of development and cultural transformation – all through the power of effective and inspiring government communication.”

He added, “We anticipate that this year’s edition of IGCF will herald a new era of positive human behaviour and practice towards government, based on the ethos of responsibility sharing. It will be an invaluable opportunity to listen to the experiences of international communication experts who have launched some of the most influential public campaigns and initiatives aimed at serving humankind.”

The SMC Chairman followed up on all the preparations for the Forum, which hosts leading international communication experts. He inspected the halls designated to hosting various interactive sessions, panel discussions and training workshops, equipped with the latest high-end audio-visual systems.

Organised by the International Government Communication Centre (IGCC), the IGCF has been successful in fostering government communication in the UAE.