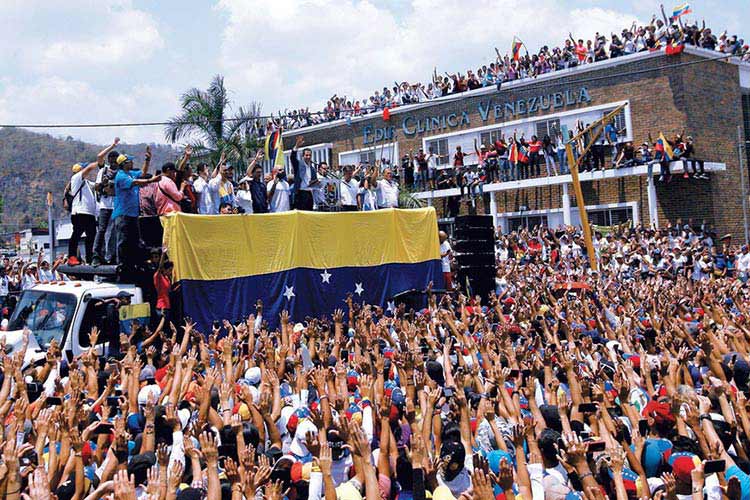 Juan Guaido (centre) gestures as he delivers a speech during a rally in Valencia on Saturday. Agence France-Presse

As Guaido, 35, kicked off his “operation freedom” in the northern city of Valencia, the pro-Maduro military staged the latest in a series of exercises.

The drill focused on defending hydroelectric infrastructure from attack -- a reaction to a weeklong national blackout that Maduro blamed on US “sabotage” but experts said was more likely the result of years of neglect.

Guaido, the head of the opposition-ruled National Assembly whose claim to be caretaker president is recognised by the US, Canada and much of Latin America and Europe, vowed he would “very soon” take up office in Miraflores, the presidential palace.

He has been pushing for nearly two months against Maduro after declaring himself acting president during street rallies by tens of thousands, following Maduro’s swearing-in for a second term despite elections widely dismissed as a sham.

“We are going to reclaim what belongs to the people,” Guaido told thousands of supporters on Saturday.

Maduro, he said, “believes that a thieving gang or a palace makes him president. It’s only the support of our people that makes someone president of a nation and he doesn’t have that. And not much longer will he be in that palace.”

Guaido offered no timeline for the mobilization across Venezuela, which he said will culminate with a march on the presidential palace in Caracas.

“I’m ready to head over to Miraflores right now, wherever my future president Juan Guaido asks me to go,” said one of his supporters, Milagros Lima, 50, a lawyer. She said that her “whole family” are among the millions who have fled the country’s dire shortages of food and medicine.

“If it weren’t for them, we’d be starving to death,” she said.

Accompanying Guaido on his tour are opposition lawmakers tasked with creating citizen assemblies -- “freedom cells” -- across the country.

The opposition said that, by Saturday, around 50 had already been set up in half of Venezuela’s 23 states.

“Whatever happens, we must be united, mobilised in the streets,” Guaido said, adding that he has not ruled out asking the National Assembly to activate a constitutional clause allowing foreign military intervention -- though such a move “depended on others.”

That was taken as a reference to US military action, which US President Donald Trump has repeatedly refused to rule out, even though there is no sign such an operation is being mounted and US allies in Latin America oppose the idea.

On Saturday, pro-Maduro demonstrators gathered in front of Trump’s White House in Washington to protest any US-led intervention in Venezuela, while anti-Maduro protesters held their own rally nearby.

Washington has so far concentrated on ratcheting up sanctions on Venezuela. That has made an already dire economic situation in the country worse, while increasing pressure on Maduro.

On April 28, a US embargo on Venezuelan oil exports will go into effect, dealing a heavy blow to Venezuela’s diminished finances, as America accounts for half of the oil exported.

A major barrier to Guaido’s plan to wrest control of the country is the military, which has so far remained loyal to Maduro, who has put generals in charge of lucrative civilian agencies and institutions.

Guaido has offered amnesties to soldiers who abandon Maduro, and on Saturday tweeted that he has “contacted” officers to ask them not to repress opposition protesters.

As has become common when the opposition holds an event, pro-Maduro crowds surged into the streets of central Caracas on Saturday.

A senior regime official, Diosdado Cabello, roared to thousands of pro-government supporters that Guaido and his team “will never enter the palace of the revolutionary people.”

He asked the crowd if they would accept “the oligarchy, the bourgeoisie” taking charge, prompting a loud “No” in response.

“We need a real opposition, one that isn’t beholden to the imperialists, one that has personal standards and knows what is really happening in Venezuela,” Cabello said.